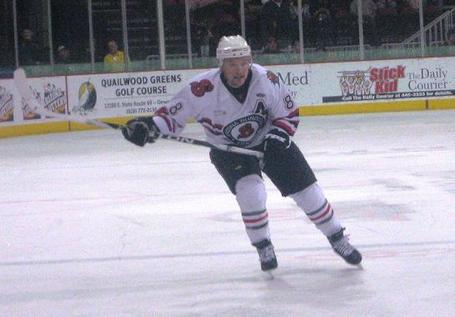 The Arizona Sundogs took to the road again this week for games on Wednesday and Thursday, both against the Rapid City Rush.

Wednesday night's game started quietly with neither team able to score in the first period. The Rush opened up a lead quickly in the second though, scoring just twenty-six seconds into the period, then following it up with another goal seven minutes later. At the midway point of the game, Sundogs' forward Kyle Hood got his team on the board, assisted by Adam Smyth and Craig Macdonald, but Rapid City would regain the two-goal lead before the second intermission. Kyle Hood would find the back of the net again halfway through the third, assisted by Craig Macdonald and Tyler Butler, but the Rush would get an empty-netter as the game wound down and take the 4-2 win. The Sundogs totaled 27 shots in the game and goalie Scott Reid turned away 29 of the 32 shots he faced.

When the teams met again on Thursday night, the game took a very different start with Rapid City scoring two goals in the first seven minutes. The Rush scored first again in the second period before Arizona forward Luke Erickson lit the lamp, assisted by Tyler Matheson and Jeff Hazelwood. Rapid City tallied one more goal in the middle frame and another early in the third before Sundogs' forward Samson Mahbod would score unassisted. The Rush would add another goal before the final horn and come away with the 6-2 win. The Sundogs totaled 34 shots in the game. Goalie Levente Szuper started the game and made 0 saves on 2 shots before being pulled and goalie Scott Reid made 25 saves on 29 shots.

Twenty-eight games into the season; Arizona is 9-15-4 and is 6th in the Berry Conference.

The Sundogs' special teams currently have a 17.27% powerplay percentage and an 80.95% penalty kill percentage.

Forward Kyle Hood continues to lead the Sundogs in scoring with 29 pts (11g/18a).

The Sundogs close out the year with back-to-back home games against the Rio Grande valley Killer Bees.