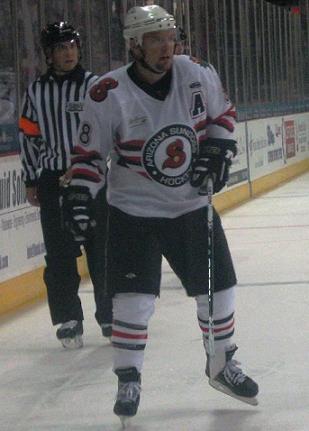 The Sundogs took to the road for their first away games of the season. The team traveled to Allen, Texas to play the Americans on Friday and Saturday. Allen got the scoring starting early with a goal less than three minutes into the first, but the Sundogs evened it up with a goal by forward Daymen Rycroft, assisted by Tyler Butler and Craig Macdonald, late in the opening frame. Arizona defenseman Jesse Perrin scored on the powerplay midway through the second period to give his team the lead; his goal was assisted by Daymen Rycroft and Craig MacDonald. Allen drew the teams even again with a goal in the last minute of the second period. The only goal in the final frame belonged to Arizona forward Kyle Hood, assisted by Daymen Rycroft and Craig MacDonald, giving his team the 3-2 victory. The Sundogs totaled 30 shots on the night and goalie Scott Reid stopped 33 of the 35 shots he faced.

The two teams met again on Saturday and once again Allen struck first, getting the only goal of the first period. In the second, the only goal belonged to Sundogs' forward Kyle Hood, who scored shorthanded midway through the period, assisted by Olivier Hotte and BJ Crum. After the low scoring in the first two frames, the teams broke it open and scored a total of eight goals in the third. Sundogs' Capitan and defenseman Tyler Butler scored on the powerplay just 34 seconds into the third, assisted by Daymen Rycroft and Kyle Hood. Allen tied the score less than two minutes later, then Arizona forward Craig MacDonald put his team in front again with assists to Daymen Rycroft and David Nimmo. Allen would then score three goals in two-and-a-half minutes to take the biggest lead of the game. Sundogs' forward Jean-Philippe Chabot would draw his team to within one with a goal assisted by Adam Smyth and Jeff Hazelwood. With just over a minute left in regulation, forward Kyle Hood would get his second of the game, assisted by Daymen Rycroft and Craig MacDonald, to send the game into overtime. Allen would score less than a minute into overtime to take the 6-5 win. The Sundogs totaled 28 shots on the night and goalie Levente Szuper stopped 37 of the 43 shots he faced.

Seven games into the season; Arizona is 2-3-2 and is 5th in the Berry Conference.

Forward Kyle Hood has scored at least a point in every Sundogs' game this season.

The Sundogs stay on the road for the next three games, playing Laredo and then Rio Grande Valley.