Share All sharing options for: Dog Caller - November 28, 2011 - We all give thanks for three wins in four games 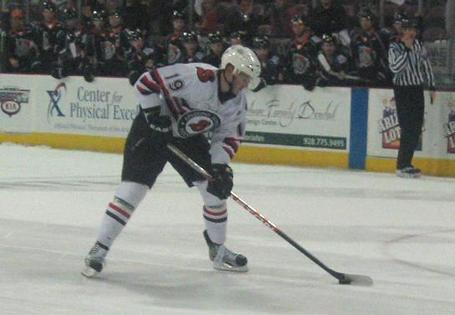 The Arizona Sundogs celebrated Thanksgiving week with four games in five nights. The first two games were on the road, against Tulsa and Texas, before coming home for back-to-back games against Rio Grande Valley.

On Tuesday night, Arizona faced off against Tulsa and the Sundogs got on the board first with a goal by forward Kyle Hood, assisted by J.P. Chabot and Olivier Hotte, less than three minutes in. Arizona got their second of the night midway through the opening frame when forward David Nimmo found the back of the net, assisted by Jeff Hazelwood and Kyle Hood. The second period opened with Sundogs' forward Luke Erickson scoring at 1:21, assisted by David Nimmo and Jesse Perrin. Tulsa would get on the board with a powerplay goal eight minutes later, but Luke Erickson would strike again 26 seconds after that, assisted by Samson Mahbod and J.P. Chabot. Tulsa's powerplay would notch another goal a minute and a half after that, before Arizona's powerplay would score thirty seconds later; J.P. Chabot assisted by Kyle Hood and Adam Smyth. Tulsa would notch two more goals before the end of the period and the Sundogs would take a 5-4 lead into the second intermission.

Arizona newcomer forward Samson Mahbod found the back of the net in the third period, assisted by Kyle Hood and B.J. Crum, but Tulsa would score twice and send the game into overtime. Neither team would score in the extra period, forcing a shootout. After all the goals during regulation, the goalies would put on a clinic in the shootout, not allowing a goal until the eighth round when both shooters would find their mark. Arizona scored in the ninth round, but Tulsa missed, giving the Sundogs the 7-6 win. The Sundogs totaled 35 shots in the game and goalie Scott Reid turned away 36 of the 42 shots he faced.

Arizona got on the bus right after the game with Tulsa and traveled to Texas to face the Brahmas the next night. Sundogs' forward Jeff Hazelwood got the only goal of the first period, assisted by David Nimmo and B.J. Crum. Arizona's powerplay struck early in the second with a goal by defenseman and captain Tyler Butler, assisted by Kyle Hood and David Nimmo. Texas would score twice before the end of the period and then once more early in the third. Jeff Hazelwood would tie the game midway through the third, assisted by David Nimmo and Luke Erickson, and send the game to overtime. Hazelwood would complete his hat-trick three minutes into overtime, assisted by Jesse Perrin and Olivier Hotte, to give his team the 4-3 win. The Sundogs totaled 29 shots in the game and goalie Levente Szuper made 30 saves on 33 shots.

The Sundogs would then return home for a two-game homestand against the Rio Grande Valley Killer Bees on Friday and Saturday. Friday night. The Bees would strike first with a goal early in the first period. Arizona forward Patrick Schafer would even the score with an unassisted short-handed goal at 14:16 of the first. The Sundogs would score early in the second with a goal by forward Tyler Matheson, his first professional goal, assisted Adam Smyth. Matheson would score again, just twenty seconds later, assisted this time by Patrick Schafer. Rio Grande would get their second goal three minutes later. Arizona forward David Nimmo would increase the lead again late in the period, assisted by Kyle Hood and Samson Mahbod. The Sundogs' powerplay would finally get on the board before the end of the second period with a goal by forward Kyle Hood, assisted by goalie Scott Reid. The Bees would score early in third, but Arizona's powerplay would score again less than three minutes later with a tally by J.P. Chabot, assisted by Kyle Hood and B.J. Crum. Rio Grande would get a powerplay goal before the end of the game, but Arizona would come away with the 6-4 win. The Sundogs totaled 24 shots in the game and goalie Scott Reid turned away 36 of the 40 shots he faced.

Arizona and Rio Grande Valley faced off again on Saturday and after the goal fest the night before, the outcome could not have been more different. The Bees scored once in the second and once in third to come away with the 2-0 win on the night, but the centerpiece of the night was the 101 combined penalty minutes by the two teams. The majority of penalties were racked up in the second period after the Bees had a goal waived off and a line brawl ensued. The brawl resulted with one of the Rio Grande players being ejected for leaving the bench to join the fight. The Bees' coach was ejected twenty seconds after the brawl for abuse of official. The Sundogs totaled 37 shots in the game and goalie Levente Szuper made 39 saves on 41 shots.

Seventeen games into the season; Arizona is 6-8-3 and is 6th in the Berry Conference.

The Sundogs' special teams currently have a 19.23% powerplay percentage and a 79.55% penalty kill percentage.

Forward Kyle Hood continues to lead the Sundogs in scoring with 22 pts (7g/15a), and forward J.P. Chabot leads the team in goals (8g/4a).

Arizona takes to the road again for three games in the upcoming week, one against Laredo and two again Rio Grande Valley.