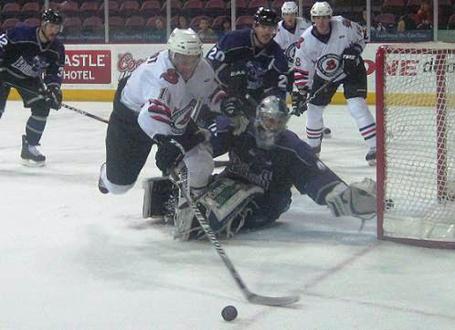 Arizona forward J.P. Chabot had three points in the three games against Texas

Arizona played a rare three games in three night homestand this week, all against the Texas Brahmas. The two teams faced-off for the first game on Thursday night and it was Texas that scored first, collecting the only goal of the first period. Sundogs' forward Luke Erickson evened the score with a powerplay goal at 1:40 of the second, assisted by J.P. Chabot and Tyler Butler. Midway through the second, Texas took the lead again with what would turn out to be the game-winning goal as neither team would find the back of the net again before the final horn. The Sundogs totaled 31 shots in the game and goalie Levente Szuper made 29 saves on 31 shots.

Friday, it was Arizona getting on the board first as forward J.P. Chabot would score less than three minutes into the opening frame, assisted by David Nimmo and Luke Erickson. The Sundogs would get on the board again as forward Luke Erickson would score on the powerplay, assisted by Kyle Hood and Tyler Butler, midway through the period. Arizona would capitalize on the powerplay again just four minutes later with another goal by J.P. Chabot, assisted by David Nimmo and Kyle Hood, and take a 3-0 lead into the first intermission. Neither team would score in the second period. Texas would find the back of the net twice in the third, but their comeback would fall short and Arizona would get the 3-2 win. The Sundogs totaled 28 shots in the game and goalie Scott Reid turned away 23 of the 25 shots he faced.

The final match-up between the teams on Saturday would be yet another one-goal win. Texas would get the only goal of the opening period and would score again early in the second period. Arizona's red-hot powerplay would show-up late in the second period with a goal by forward Jeff Hazelwood, assisted by Kyle Hood. The Sundogs' powerplay would tally another goal early in the third as forward David Nimmo would even the score, assisted by Tyler Butler and Luke Erickson. Texas would score midway through the third period however and take the 3-2 win. The Sundogs totaled 29 shots in the game and goalie Levente Szuper made 37 saves on 40 shots.

Thirteen games into the season; Arizona is 3-7-3 and is 6th in the Berry Conference.

The Sundogs' special teams have been much improved lately and currently the team has a 18.33% powerplay percentage and an 81.54% penalty kill percentage.

With forward Craig Macdonald currently out with a concussion, forward Kyle Hood has taken over the scoring lead for Arizona with 14 pts (5g/9a).

The Sundogs have a busy Thanksgiving week ahead of them, starting with road games against the Tulsa Oilers and Texas Brahmas on Tuesday and Wednesday before returning home for games against the Rio Grande Valley Killer Bees on Friday and Saturday.