Share All sharing options for: By the Numbers: Mike Smith v. Ilya Bryzgalov

Anyone that knows me knows I'm not so much a stats guy. However when they show fun things like how awesome Mike Smith is. I can use one or two. With how everyone was freaking out about how Phoenix was going to eat it when they traded away Byzgalov's rights to the Flyers, Mike Smith seemed to be, well, not an adequate upgrade. Nevermind the fact that he was a similar build of Bryzgalov, had formerly played for Dave Tippett and would have a great goalie coach in Sean Burke to improve his game. The early evidence though shows that the Coyotes are doing just peachy without the big Russian. Sure 13 games isn't a season, but hard to argue that the Coyotes would be better off paying Bryz a boatload of money than they are with Smith right now. Let's look at the numbers. 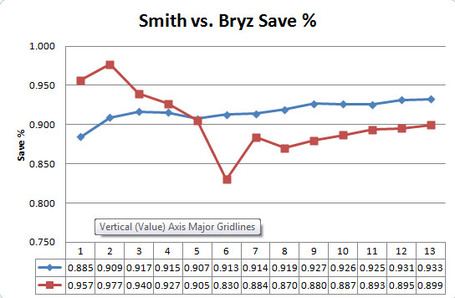 Blue is Smith, Red is Bryz. This is overall Sv% as each game is played. As you can see. Bryz started out strong and took a huge hit in the Winnipeg game that he's still recovering from. Smith had his worst game right out of the gate. They've both normalized somewhat and are both slowly getting even better. Smith is still .034 better in this department and while the sample size is a little small shows that really the Coyotes are just fine without the big russian. 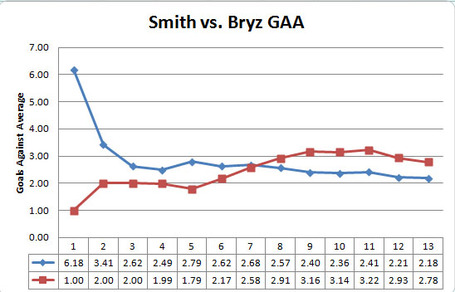 This are similar in the GAA as well. Bad outing at the outset for Smitty, but as the games collected up he was able to get that under control and is 8th among goalies that have played 10+ games in the category. Bryz wasn't as effected by that Winnipeg game in this stat but you can see that it ballooned a bit following it. His last few outings he's only given up two goals, but as we well remember he has games where he just gives up ridiculous soft goals. Look for the Coyotes to really press him early in the game. They know what beats him.

And if you needed any other evidence that the Coyotes just plain don't need Bryz? Check out this from Todd Walsh interviewing Derek Morris: http://chirb.it/1EgC0k