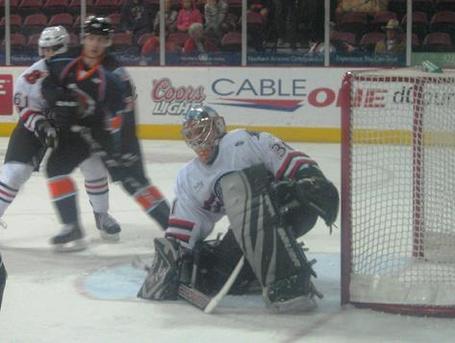 The Arizona Sundogs continued their road trip with a game against the Laredo Bucks and then wrapped it up with two games against the Rio Grande Valley Killer Bees.

Arizona and Laredo faced-off on Wednesday night and it was a penalty filled affair. By the final horn, the teams had amassed a total of 117 penalty minutes, including four game misconducts and a match penalty. Arizona scored first with a goal by forward Daymen Rycroft, assisted by Adam Smyth and Luke Erickson, less than three minutes into the opening frame. Laredo would even the score midway through the period before newly re-signed forward Patrick Schafer would put Arizona ahead once more; assisted by Luke Erickson and David Nimmo. The Bucks would score twice more before the end of the period to take the 3-2 lead into the first intermission.

Midway through the second, Sundogs' forward Craig Macdonald would tie the score with an unassisted goal, but Laredo would take the lead once more five minutes later. With just over a minute left in the period, a Laredo player would deliver a blindside elbow to Daymen Rycroft that would lead to two separate fights and the beginning of the penalty fest. Laredo would score the only two goals of the third period to get the 6-3 win. The Sundogs totaled 27 shots in the game and goalie Scott Reid turned away 33 of the 393 shots he faced.

Arizona would wrap up the roadtrip with a final game against Rio Grande Valley on Saturday. The Killer Bees would put 50 shots on goalie Levente Szuper; getting only two past him. The Sundogs would only get one goal though, by defenseman Corey Toy and assisted by Luke Erickson. Rio Grande Valley would get an empty-netter as well to end up with a 3-1 win on the night. Arizona would total 35 shots.

Ten games into the season; Arizona is 2-5-3 and is 6th in the Berry Conference.

The Sundogs return home for a three game stand against the Texas Brahmas.