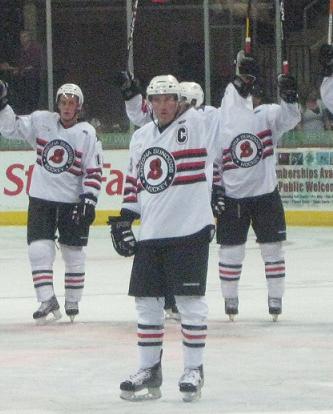 Captain Tyler Butler skated in his 500th game on Saturday

Arizona continued its season-opening homestand with three straight games against the Missouri Mavericks. The teams faced-off on Wednesday night and forward Jean-Phillip Chabot got the Sundogs on the board first with a goal midway through the opening frame; his goal was assisted by Kyle Hood and Jeff Martens. Five minutes later, forward Kyle Hood scored for Arizona on the powerplay; assisted by Jean-Phillip Chabot and Tyler Matheson. Arizona took a 2-0 lead into the first intermission, but unfortunately that would be the end of the scoring for the Sundogs as the Mavericks would go on to score seven unanswered goals over the next two periods. The Sundogs totaled 51 shots in the game and goalie Scott Reid turned away 26 of the 33 shots he faced.

The Sundogs and Mavericks met again on Friday night and it was Missouri who got on the board first this time, scoring just over four minutes into the second period. Arizona was scoreless until Capitan and defenseman Tyler Butler found the back of the net four minutes into the third period with his team on the powerplay. Kyle Hood and Daymen Rycroft assisted on Butler's goal. The teams would remain tied through the rest of regulation and through overtime. Each team would have two skaters score during the opening five rounds of the shootout, sending it to sudden death with the Mavericks getting the win on the eighth round. The Sundogs totaled 35 shots in the game and goalie Levente Szuper made 41 saves on 42 shots.

After two losses, Arizona was looking for payback on Saturday night. Missouri scored twice in the first and once in the second to take a 3-0 lead into the final period. Sundogs' forward Craig MacDonald broke the shutout early in the third with a grinding goal on the powerplay, assisted by Tyler Butler and Kyle Hood. Forward Luke Erickson would cut the Mavericks' lead to one midway through the period, assisted by Tyler Butler. With under a minute left in the game, Arizona would pull the goalie but lose the face-off and allow Missouri to score an empty-netter for the 4-2 win. The Sundogs totaled 44 shots in the game and goalie Levente Szuper turned away 34 of the 37 shots he faced.

Five games into the season; Arizona is 1-3-1 and is 5th in the Berry Conference.

Forward Kyle Hood has at least a point in every Sundogs' game this season.

Arizona goes on the road now, facing the Allen Americans on Friday and Saturday.

On a personal note, I just wanted to mention that my sister, niece and I have just bought a coffeehouse/café in Prescott, Arizona and it will be opening today, October 31st. It's called Sweet Anne's Café and is located at 142 N. Montezuma in Prescott, less than a block from the Courthouse Square. If you are in the area, please stop by. If you mention that you read about the café on the Five for Howling site, you'll get a 10% discount off your entire order.