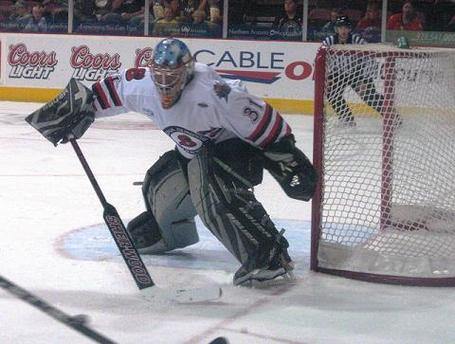 Goalie Levente Szuper returned to the Sundogs for a second season

The Arizona Sundogs took to the ice on Friday October 21st to open their 2011-2012 CHL Regular Season. The anticipation for this season has been at a high level with the team hosting this season's CHL All-Star Game. There are several familiar faces on the Sundogs this year, both returning players and players that Arizona has faced in previous seasons. The opening roster was announced as follows:

Arizona opened the season with back-to-back home games against the Laredo Bucks. On Friday night, neither team scored in the first period and it was halfway through the second before Laredo found the back of the net for their first goal on the powerplay. The Sundogs evened the score five minutes later with a goal from forward Luke Erickson, assisted by Kyle Hood and Craig McDonald. Less than a minute later, Laredo would regain the lead with another powerplay tally and the eventual game winning goal. The Sundogs totaled 35 shots in the game and goalie Scott Reid turned away 35 of the 37 shots he faced.

The teams met again on Saturday, and this time it was Arizona who struck first with two goals in the opening period. The first goal came halfway through the period when forward Jean-Philipp Chabot found the back of the net; he was assisted by Adam Smyth and Tyler Matheson. Forward David Nimmo got the second goal with assists to Jeff Hazelwood and Kyle Hood. Laredo roared back in the second period, scoring three unanswered goals. The third goal came on a five-minute powerplay when forward Adam Smith was given a fighting major and was tossed for the game for attempt to injure. In the third, Jean-Philipp Chabot tied the game with his second of the night for the Sundogs, assisted by David Nimmo and Olivier Hotte. Midway through the final frame, Arizona forward David Rycroft gave his team the lead again when he scored after a mad scramble in front of the net; his goal was assisted by Craig Macdonald and Shawn Morton-Boutin. The Sundogs held onto the lead until the final buzzer and got their first win of the season. The Sundogs totaled 42 shots in the game and goalie Levente Szuper made 30 saves on 33 shots.

Arizona will face the Missouri Mavericks at home for three games in four nights next week.