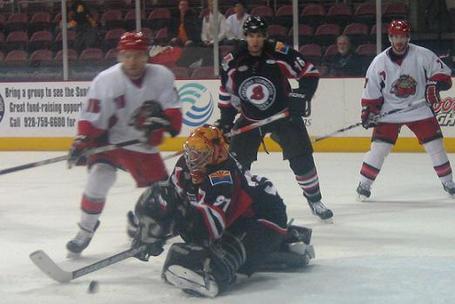 Levente Szuper with a kick-save Saturday against the Odessa Jackalopes

The Arizona Sundogs opened a nine game home stand with games against the Odessa Jackalopes on Wednesday, Friday and Saturday. After a winless road trip, the Sundogs were looking to get back on track in front of the home crowd.

Arizona struck early Wednesday night as forward Luke Erickson scored just 2:47 into the opening frame. Forward Mark Kolanos added to the Sundogs' lead midway through the period and the team would take the two-goal lead into the first intermission. Odessa would get the only goal of the second, scoring on the powerplay early. Arizona would once more extend its lead midway through the third period with a powerplay goal by forward Jason Williams and then another by Luke Erickson even-strength. Odessa would then pull to within a goal once more with an even strength tally followed by a penalty shot, but Arizona forward Patrick Schafer would score an empty-netter off a face-off to secure the 5-3 Sundogs' victory. The Sundogs totaled 32 shots in the game and goalie Levente Szuper made 43 saves on 46 shots.

Friday night the teams were back in action and once more Arizona struck early as forward Joey Sides got a wrister past the Odessa goalie less than a minute into the opening frame for the only goal of the period. The second period belonged to the Jackalopes as they scored two even-strength goals. Midway through the third period, the Sundogs' powerplay would even the score with a goal by forward Luke Erickson and send the game into overtime. Just over a minute into the extra frame, Luke Erickson would take a shot on the breakaway and score the game winner as the Odessa goalie could only catch a part of the puck then watch it roll down his arm and into the net for the 3-2 Sundogs' win. The Sundogs totaled 33 shots in the game and goalie Levente Szuper turned away 37 of the 39 shots he faced.

The crowd at Tim's Toyota Center would be treated to a special-teams display when the teams faced off again on Saturday night. Odessa would start the scoring early this time with a goal at 2:22 of the first, but Arizona forward Joey Sides would score his fourth shorthanded goal of the season just 34 seconds later. The Jackalopes' powerplay would score two minutes later to once more gain the lead. Not to be outdone, Arizona's powerplay would strike three times before the end of the period with goals by forward Luke Erickson at 5:47, forward Jason Visser at 6:06, and another by Joey Sides at 9:59. The Sundogs would take a 4-2 lead into the first intermission. The powerplay would continue to shine in the second period with a goal by defenseman Jamie VanderVeeken. Odessa would then take control, scoring twice in the second period and once in the third to tie the game and send the teams to overtime for the second straight night. Neither could score in the extra frame and the teams would go to a shootout. Odessa would get the lone goal in the shootout to come away with the 6-5 win. The Sundogs totaled 36 shots in the game and goalie Doug Groenestege made 49 saves on 54 shots.

On January 22nd, forward Mark Kolanos was placed on the 10-day I.R. and forward Karl Sellan was active off of injured reserve.

Forward Luke Erickson is tied for the goal scoring lead in the CHL with 26 goals this season.

The Sundogs continue their home stand with games against the Colorado Eagles on Friday, Saturday and Sunday.