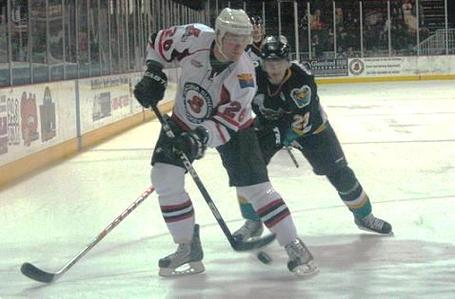 After the All-Star break, the Sundogs took to the road again for games against the Wichita Thunder, Tulsa Oilers, and Allen Americans. In the past, Arizona has had more success on the road than on home ice, but this road-trip was far from successful.

On Friday night, the Sundogs matched up against the Oilers in Tulsa, Oklahoma for their only meeting this season. Tulsa scored three goals in the first period before Arizona forward Patrick Schafer would get his team on the board. The second period belonged wholly to the Oilers as they would score four unanswered goals. Midway through the second, Arizona goalie Levente Szuper was pulled and replaced by back-up Doug Groenestege. Sundogs' forward Kyle Hood would score early in the final period, only to be answered back a minute later by another Oilers' goal. Arizona forward Cam Keith would score on the powerplay midway through the third, but Tulsa would get its own special teams' goal two minutes later and come away with the 9-3 win. The loss was Arizona's second biggest this season and the nine goals allowed equaled the most ever given up by the team. The Sundogs totaled 43 shots in the game, goalie Levente Szuper turned away 13 of the 20 shots he faced, Doug Groenestege made 10 saves on 12 shots.

The Sundogs traveled Wichita, Kansas on Saturday night to face the Thunder for their final regular season match-up. Wichita got on the board first with two goals in the opening frame before Arizona forward Joey Sides netted one for his team. The Thunder would score early in the second to regain the two-goal lead. With Wichita on the powerplay late in the period, defenseman Jamie VanderVeeken would score his first goal as a Sundog with a slapshot from the blue line. The Thunder would score first again in the third period, before forward Mark Kolanos would pull Arizona to within one with 6:27 left to play. Wichita would score two more, including their own short-hander, to come away with the 6-3 win. The Sundogs totaled 36 shots in the game and goalie Doug Groenestege turned away 19 of the 25 shots he faced.

Arizona then made the trip to Allen, Texas to play a midday game against the Americans on Monday. Midway through the first, Allen would score a shorthanded goal with an extra attacker on the ice. Sundogs' defenseman Billy Bezeau would tie the game up with a goal four minutes later. Less than a minute after that, the Americans would regain the lead with a powerplay goal. The second period was all special teams as Allen would collect two powerplay goals before Arizona forward Cam Keith would score on the man-advantage late in the period. Sundogs' forward Joey Sides would get the only goal of the third, and the Americans would come away with the 4-3 win. The Sundogs totaled 42 shots in the game and goalie Levente Szuper turned away 15 of the 19 shots he faced.

Joey Sides represented the Arizona Sundogs in the CHL All-Star game on January 12th in Rapid City, South Dakota. In the game he got one assist, totaled three shots, and ended the game even on the +/-. The CHL All-Stars beat the Rush 11-6.

The Sundogs begin their longest homestand of the season, nine games, with three straight against the Odessa Jackalopes tonight.