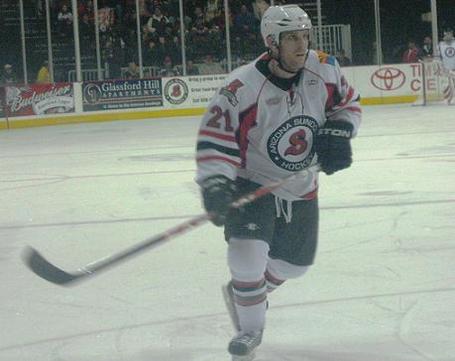 Friday night's contest began with what has become an all too familiar sight lately for Sundogs' fans, the opposing team scoring first, as Rio Grande got one into the goal just 2:36 into the first period. Arizona forward Luke Erickson evened the score late in the first, and the teams went into the break tied. The teams traded goals in the second period with Sundogs' forward Joey Sides scoring midway through the period before the Killer Bees tied it up on the powerplay five minutes later. Rio Grande took the lead again with a goal five minutes into the third. Fifteen minutes into the final frame, Arizona found its scoring touch and tallied three goals in 3:41. All three goals were even strength, the first scored by captain and defenseman Tyler Butler, the second by forward Jason Williams, and the third by forward Kyle Hood. Veteran forward Jason Visser broke his point scoring drought with three assists in the game. Arizona was held without a powerplay goal for the first time in six games. The Sundogs totaled 42 shots in the game and goalie Doug Groenestege turned away 29 of the 32 shots he faced.

The teams faced off again on Saturday night for the last game the Sundogs would play before the All-Star break. This time it was Arizona who got the scoring started when rookie forward Patrick Schafer got one in the net just 37 seconds into the first period. Sundogs forward Luke Erickson would continue his hot streak with a goal just three minutes later; giving Arizona the two-goal lead going into the first intermission. The Sundogs' powerplay would get back on track with a goal by forward Jason Williams 1:14 into the second period. The Killer Bees' special teams would get them on the board with two straight goals before the Sundogs' powerplay would answer back with a goal by forward Cam Keith. Arizona would take the 4-2 lead into the second break. The Killer Bees' powerplay would strike again less than four minutes into the third period, cutting the lead to one. Arizona's powerplay would once again answer back two minutes later with Luke Erickson scoring his second of the night. Sundogs' forward Jason Visser would score even strength at 15:50 of the third, and Arizona would come away with the 6-3 victory. Forward Kyle Hood would collect four assists in the game. The game would be Luke Erickson's third consecutive multi-point game and his fourth in the last five games. The Sundogs totaled 46 shots in the game and goalie Levente Szuper turned away 41 of the 44 shots he faced.

Luke Erickson was named the Oakley CHL Player of the Week for the period ending January 9, 2011. Erickson collected multiple points in each of Arizona's games against the Rio Grande Valley Killer Bees, tallying seven points (5g/2a) and a plus-4 rating. Erickson was acquired by the Sundogs in a trade with the Rapid City Rush on November 11, 2010 and has a total of 39 points this season (21g/18a). 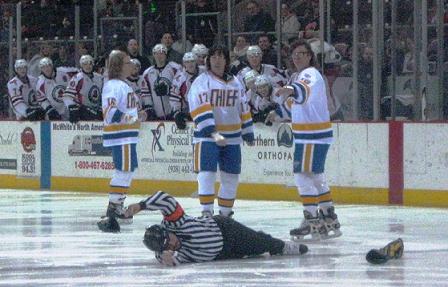 During the Sundogs' game against the Killer Bees on January 8, the Hanson Brothers from the movie Slapshot made an appearance at Tim's Toyota Center. The trio participated in a pregame face-off where they beat up the opposing goalie and the referee. The brothers also tossed souvenirs to the crowd during the first intermission, signed autographs and took pictures with fans. 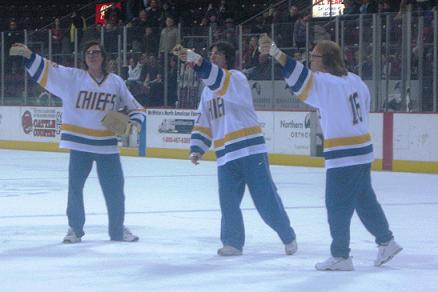 On January 8, 2011, the Sundogs announced that President Jerry McBurney, Vice President of Business Operations Bryan Bloodworth and Sponsorship Sales Executive Katie McGlaughlin have been relieved of their duties. "After evaluation, our ownership group believed that a change in leadership was necessary," said Mile High Hockey, LLC managing member Brad Fain. "Changes like these are never easy but we're confident they are in the best interests of the franchise. We appreciate all that Jerry, Bryan and Katie have done for the organization and wish them all the best moving forward." Mile High Hockey, LLC ownership investor Ed Lepordo has been named interim President.

Mile High Hockey, LLC is committed to the success of the Arizona Sundogs both on and off the ice and a change in the organization's front office had become necessary. The decision was not taken lightly but ultimately our business is driven by results and we are confident these changes have been made in the franchise's best interests.

Our ownership group will continue to evaluate the front office and will make additional changes should they become necessary. We believe we have talented individuals on our staff and we're going to rely on them to return the organization to the levels of success first enjoyed during the club's early seasons.

We appreciate all that Jerry, Bryan and Katie have done for the organization and would like to thank them for their time and effort.

Arizona goes on the road after the All-Star break with games Friday, Saturday, and Monday against the Tulsa Oilers, Wichita Thunder, and Allen Americans.