Share All sharing options for: Coyotes Morning News - It's So haaardd to say goodbyee to Travis Haaaaaiir. 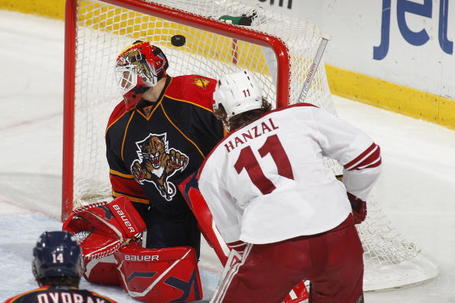 
Like a fat kid in rollerblades, cresting atop San Francisco's famed Lombard Street, the NHL is teetering into what seems to be one of the more ugly free agency periods we've seen in recent years.  Will this be the year of the fire sale?  Hard to say until July 1st, but all signs definitely point to this definitely not being the Year of the Goalie. Well, if you're into hometown heroes and whatnot. Here's a few examples:

Jaroslav Halak - playoff hero, now a member of the St. Louis Blues.  It looks like Montreal may have finally given up on finding the next Patrick Roy.  That, or they think Carey Price is that guy.

Evgeni Nabokov - Fear The Fin has a couple excellent articles on the greatest goalie in San Jose's history.  The good news is, San Jose fans have all come to their senses and realized that sometimes, business is business.


Marty Turco-  While sometimes criticized for his unorthodox style of play, Turco has the Stanley Cup ring to back it up. This year's playoffs are a prime example of why all the aforementioned goalies will be starting anew elsewhere.  They all demand too much money, and it seems that not many franchises are interested in blowing a ton of money on a position that can be replaced just as easily for half the price.

Most of the mornings are spent waiting for more breaking news, so i thought today we'd switch it up a bit.  The Grandfather of Five For Howling, Travis Hair, is moving.  He'll still be here doing his thing,  we just won't get to see him at as many Phoenix  Arizona Coyotes( still looks weird) home games as we'd like.  So with that being said, I offer you the Top Ten Reasons We'll miss Travis Hair ( in person)... After the jump, of course.

( We're just having fun here, so feel free to post your love for Travis down below.)  Alright, let's do this!

# 10 -  The FFH Groupies -   During intermissions at Coyotes games, all the smokers congregate on a designated patio outside of Jobing.com Arena.  While most of us who know Travis are always happy to see him, it never fails.  There is ALWAYS someone who has never met him, then introduces themselves like they're Justin Bieber meeting President Obama.  It's become a bit of a novelty, and is always good for a chuckle. And of course, Travis is always the chivalrous gentleman.

# 9 - The Smirk -  Honestly, I don't know how he does this one.  While I have the propensity to swear like a sailor over menial things, Travis has The Smirk. Sometimes, it looks like he's in pain. Other times, it looks like he wants to kill someone.  Whether he's happy, sad, angry, constipated, sleepy, etc...   Very rarely will you hear Travis curse.  Maybe the smirk comes from the fact that he's literally biting his tongue.  And uh, who knows. Maybe he is just constipated.  Those 'Coyote Dogs' can be a real bi-...big pain on the stomach.

# 8 - The Note Pad of Death -  The bane of my hockey existence.  In his neverending quest for journalistic excellence, Travis attends every game with this thing. It looks like a harmless, pocket notepad. But during games, Travis can be seen furiously taking notes about every last detail of the goings-on in the arena.  Travis can tell you that Radim Vrbata picked his nose at 12:41 of the second period,  used his right hand, then wiped the booger on Scottie Upshall's left shin guard.  If said booger falls off, Travis knows exactly where it is. and the whole time, I just want to say " PUT IT DOWN AND ENJOY SOME OF THE GAME, TRAVIS"!  Then again, if you've read my articles, you know why Travis rocks.  Me likey the bright colors.

# 7 -  Patience - Whether it's a flood of Detroit fans trolling  Five For Howling during the playoffs, or fielding whiny complaints about certain associates of his, Travis never misses a beat. When it comes to FiveForHowling, this man knows his domain.  Very rarely has anyone seen Travis bat an eyelash over someone flying off at the handle, and takes any necessary measures to defend The Coyotes, their fans, and anything encompassed by the organization.  It's a good thing this ship isn't going down, because there's no way in H-E-double-hockey-sticks Travis would accept a snorkel.   It's a good thing, too.  If Travis had told me to go to one of these ownership meetings, I might've brought my own hockey stick and put on a demonstration of major stick infractions.

# 5 - THROW THE SNAAAKE!!! -  I know Chemmy from PPP gets just as much credit as Travis on this one, but a fun rallying call for Coyotes fans was what we all needed during last year's playoffs.  It was fun, it seemed harmless, and it took over the greater Phoenix area like a house afire.  Heck, I even risked getting arrested by throwing a 4 footer onto the ice during Game One.  Sadly, only someone's cell cam got that . How big was Travis' first forray into meme-dom?

Yes, we even got shirts ( I believe you can get your own HERE ) 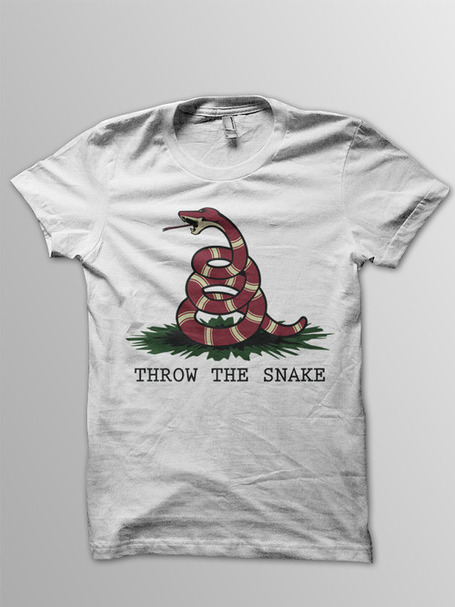 # 4 - Connections  -  I'm sure there's an explaination of how he does this in his Notepad of Death somewhere, but Travis knows EVERYONE.  I mean, I know of most of these people.  But the people Travis interacts with regularly within the Coyotes organization is astounding.  From broadcaster Dave Strader, to all sorts of people within the Ice Edge Holdings group, Travis is the go-to guy.  I don't know how he meets these people, gets their numbers, has breakfast in bed with them, whatever.  But he does.  And if he's got everyone on the planet's number in that little notepad of his, then maybe he'll hook me up with Mila Kunis or Natalie Portman's digits one day.

# 3 - Knowledge of the Game -   Without a doubt, Travis' sneakiest attribute makes him the perfect person to run this little steam engine.  On many ocassions, fans of other teams have come here to spew unintelligible hatred towards the Coyotes. On most ocassions, statistics about the most random things are thrown at us as a tool for affirming their hatred. Normally, I would do research until I could make a fact-based retort. The problem with that is, by the time I have the information I need, Travis would already engaged the conversation, put this person in their place, and sent the perpetrator sulkingly on their way.  On more than one occasion, all I could muster up once Travis had leveled someone was ' Yeah. and your mother, too".

# 2 - His love of the Coyotes -   In my opinion, Travis is the single biggest Coyotes fan on the Planet. Heck, Jordan and I feel guilty running into Travis when we run into him at games where our hometown squads are visiting.  The Coyotes should build a statue for Travis right in front of the arena, because throughout this whole ownership ordeal no one has stayed this loyal, optimistic, and determined to publicize this team as one that can thrive.  I can say that I've done a lot of lobbying for fan support, ownership finality, and the like.  But anything I have said or done in the past pales in comparison to the amount of work Travis has lovingly thrown on his back, and received little-to-no recognition from the franchise.    And that my friends, is the definition of "die hard".

# 1 - The man, the myth, the good friend -   Living in Arizona is quite the culture shock.  I grew up in the bay area, played hockey for 25 years, and was used to perfect weather and bountiful ice arenas.  The San Jose Sharks spoiled me, I guess.  With only a handful of rinks down here, hellacious weather, and no friends in the podunk town I call home, I came to FiveForHowling as a means to connect with people who shared my interest in hockey, maybe even meet up with them at Coyotes games.  The very first person I met was Travis.  And since then, Travis has taught me a lot about this state, the way things work, and about being a good friend.  And while we continue to be friends from afar, I can't wait to come on here and see him crunching numbers, disspelling rumors, and verbally destroying people from Winnipeg who come here to pick fights.

Best of luck on your move, bud.  We'll fly your butt out here if we have to for some games.

The rest of you?  Leave your thoughts on Travis down below, and we'll have some links if/when they happen this evening.