Share All sharing options for: Weekend links - Going To Our Happy Place 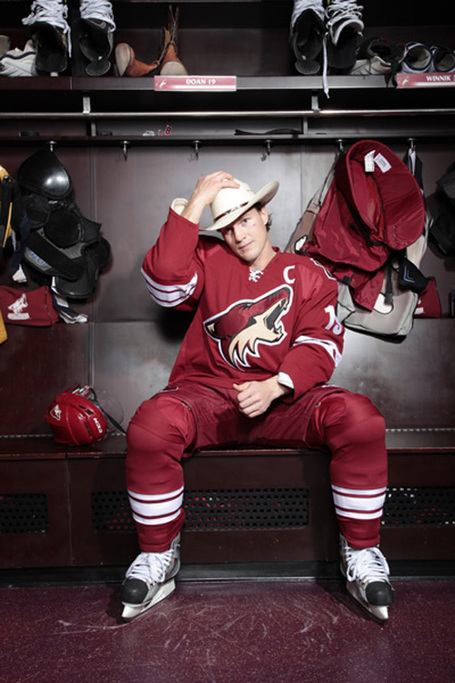 If there's one major misconception about Coyotes fans, it's about their dedication.  Most hockey towns don't have to worry about MOU's, COO's, using their children as tools for pandering government hacks  officials in City Halls, etc..  And yet, the fans come. In droves, nonetheless.  Travis, Jord, and myself have said it time and time again.  If you show us some stability, the fans will come back.  I'm no businessman, so I don't understand strange posturings and tactics used by Ice Edge to get this finally done. What I do know, is that we have a time frame to finally solidify IEH as the new owners of the Phoenix Glendale Arizona Coyotes(?!).  AZ Central has information regarding this, in the best attempt at layman's terms we've seen so far.  You can check it out by clicking here.

• Ice Edge could learn a thing or two about sticking up for the fans, and the perfect example is our knight in shining armor, GM Don Maloney.  If GMDM wants to win the GM of the Year award again, he's already off to a great head start. Sick 'em, GMDM.

Sounds like certain Canadian newspapers are the equivalent to this guy, in GMDM's eyes:

• Speaking of GMDM, we've been chomping at the bit to discuss possible rosterbation for the upcoming season, but it's kind of hard to do when we have no real idea what the 'Yotes' budget entails.  The possible departure list is ever changing, with names like Robert Lang, Matthew Lombardi, Zybanek Michalek etc.. all rumored to be on their way out.  So if we want to play Fantasy Land, here's a list of the Top 50 free agents as of July 1st.  I'll pretend I didn't see numbers 9,13, or 16.

• I'm not sure if this was brought up earlier in the week, but it seems someone on the Blackhawks is a talented grafitti artist.  The object of their affection?  Chris Pronger, of course. You stay classy, Patrick Kane.

•  My birthday's next month. SOMEONE BUY ME THIS. We can get it painted later. That's just awesome.

• In case you haven't checked it out yet, SB Nation has a brand spanking new site dedicated just for Arizona sports teams!  Lots of good people all around, so give it a once over if you haven't already.

Leave some thoughts on free agents you'd be interested in, and we can get the ball rolling on UFA Fantasy Land.

And, if you have your adult ears on, check out this comedian/musician who opened for Conan O'Brien during his theater tour. His name is Reggie Watts, he's got an awesome new DVD out ( which I highly recommend), and the language is definitely NSFW.  Here he is closing up his set at Bonnaroo, and you might want to give it a minute before it picks up.