Coyotes Tracks for Saturday, May 8th. Déjà Vu, All Over Again

Share All sharing options for: Coyotes Tracks for Saturday, May 8th. Déjà Vu, All Over Again 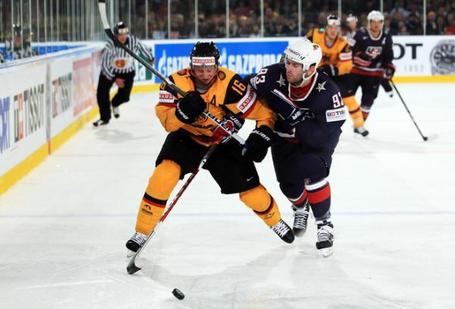 ( Michael Wolf Of Germany And Keith Yandle Of Team USA Compete For The Puck. Image via  Bongarts/Getty Images)

•  77,000 people show up at a soccer stadium to watch a hockey game-   Keith Yandle got to play in front of 77,000+ fans in Germany during a preliminary game at the IIHF World Championships.  That's 4 Jobing.com Arena's worth of Lowenbrau-fueled hockey fans ( Note to self. Oktoberfest seems like a perfect vacation spot this year).  Still can't grasp the scale of how many people showed up to look for a hockey puck?  Check out the article and picture here .

•  GM Don Maloney nominated for inaugural GM of the Year Award - Congrats on the nomination, GMDM. We thank you for your shrewd business tactics to turn us into contenders. Words can't express what fans would have felt had you not.

• A special thank you to Roberta B for the wonderful e-mail that was sent to all the mods here at FFH.  It's nice to get a pat on the back once in awhile, and we hope we've lured you back into the wonderful world of hockey for good.  Cheers.

After the jump, I lose my cool and lash out to anyone who will listen.  Trust me, my keyboard will be screaming at the top of it's lungs.  MAYBE IF I TYPE IN ALL CAPS I WILL BETTER CONVEY MY ANGER. YOU WONT LIKE ME WHEN I'M ANGRY. 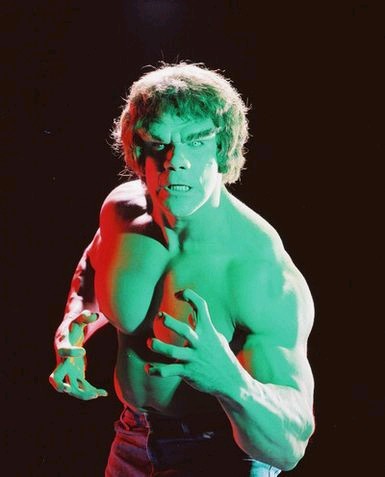 Or maybe I'll just explain myself , with a few thesauras words tossed in for intellectual purposes.

Where to begin?  It's not like we haven't been through this before.  As a matter of fact, Phoenix Coyotes fans were actually elated to find out we wouldn't have to go through the emotional rollercoaster that has plagued our franchise over the past few offseasons. "Finally", we all thought.  'Stability in knowing we  have our franchise here to stay makes life so much less stressful" .   And ta-da!  Guess what?  Just like all of our friends from Second City Hockey warned us, Jerry Reinsdorf turned out to be a total snake.

Truth be told, the Reinsdorf bid was not a popular decision for a lot of us in the know.  With his shady 5 year buyout clause, it would only be a matter of time before Coyotes fans would be wondering when JR would sell the Coyotes just to line his pockets.   Conversely, we loved the Ice Edge Holdings attempts to appeal to the fanbase, even going so far as to prank the snot out of a Toronto hack  journalist.  But Ice Edge has also proclaimed their commitment to giving an expansion team to Thunder Bay, Ontario.  And with their proposed purchase of the Coyotes, Ice Edge would want to move some Coyotes home games to strange tundra-like locales, like Saskatoon.  If they're committed to keeping our franchise in Phoenix for the long haul, then why d*ck us out of home games?

Look, I'll be honest.  Attendance at the beginning of the year sucked.  And it should have. But, you have to understand a few important  things. After multiple offseasons of being treated like a dangling steak in a cage full of pitbulls, even the most ardent of Coyotes fans have been worn out. The talk of " hockey will never in the desert" is purely an easy way out for those looking for a scapegoat.  The same talk arose in 1991 when the NHL gave a franchise to a city in Northern California no one had ever heard of.  The argument was that people in Northern California would never care for a sport usually relegated to cold-weather markets.  Besides, Northern California had the Oakland Seals, and they never worked out.  So no way in Hades would another franchise would thrive in San Jose, right?.  Wrong. San Jose is not only a top 5 team in league-wide attendance, but opposing players voted it THE SINGLE MOST INTIMIDATING BUILDING to play a road game in.  How is this pertinent to the Coyotes?  Let me explain.

When San Jose was an expansion franchise, they were terrible for their first few seasons. The big difference between San Jose and Phoenix is the fact that SAN JOSE COMMITTED TO GIVING THEIR FANS A BETTER PRODUCT.  We got Wayne Gretzky and his buddies, so they could all pretend their on-ice legacy would translate to the bench.  We gave them a shot, and it failed.  Yet they persisted, subjecting us to more years of empty promises and no real signs of commitment to improve.  I've touched multiple times on the BS line that was fed to fans about a 'youth movement".  Some fans felt royally screwed by the Gretzky, and rightfully so.  With that, attendance started to look like a leaky dam.  No amount of bubble gum from Gretzky's mouth was going to plug that hole.  Already, the snowball had started to roll.

Next came the Ballsillie debacle,  which not only left the future of the franchise in doubt, but even more fans' loyalty was strained.  More cracks in the dam, more people shying away from the turnstiles.  Even with the additions of Dave Tippett and a great first half of the season with a revamped lineup, the dark cloud of the NHL's ownership loomed over the heads of all Coyotes fans.  Not that the Coyotes were losing fans over it, but nothing was being done to win back the loyalty of those who had stayed away due to the uncertainty of the Desert Dogs' future. That being said, it only gets worse once that snowball is already rolling down the proverbial hill.

It's no coincidence that once Ice Edge Holdings' bid was approved in it's preliminary stages, interest in the Coyotes skyrocketed.  Cautious optimism was exercised by fans, but at least they were coming back to the arena.  At the end of the season, the Coyotes looked like a legitimate franchise, it's fanbase back in full force. This is no accident.  Showing the fans that you are committed to them is what will make the fans commit back to you.  Period. The proof is in the puddin'.

And here we are. AGAIN. With talk of leaving town, AGAIN.  Fans are angry.  Fans are emotionally drained.  After the best season in franchise history, the talk of us being the NHL's whipping boy was gone.  It felt great to be a hockey fan, to look forward to coming back next season to packed houses once again.  But fans are subjected to THIS.  AGAIN.  The City of Glendale is run by a bunch of morons who can't tell their asses from their elbows, so that's already a huge hurdle.  I am no shrewd businessman, but their antics of posturing and haggling every little detail with no compromise  has all but turned the NHL off of keeping our franchise here.  Trust me, they have a lot of fingers that should be pointed in their direction during this blame game.

But, understand this.  Coyotes fans are passionate. But they are also emotionally drained, hurt, and downright pissed off.  Just when you, as fans, were finally given the respect and trust you deserved, the keys to the car are yanked out of your hands.  And if you're looking for future commitment from fans down here, NHL, then you need to stop treating fans like they're a kid nobody wants in a divorce proceeding.

This hurts. It angers me. I want to go to City Hall and bunch someone in the face.  I want to punch Jerry Reinsdorf in the face.  I just want to punch something.  Another offseason of this crap.  WHEN IS ENOUGH, well, ENOUGH?  WE WANT TO COMMIT. GET IT THROUGH YOUR SKULLS. You know, your skulls. Those things stuck up your asses. 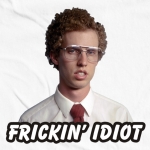