Coyotes Tracks : Weekend Musings on the eve of the Conference Finals

Share All sharing options for: Coyotes Tracks : Weekend Musings on the eve of the Conference Finals 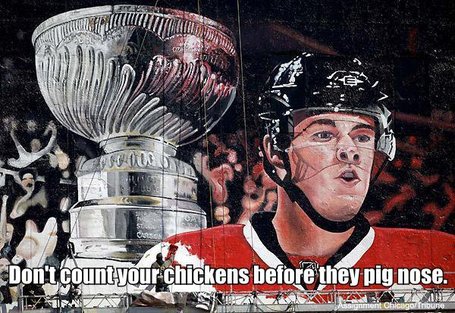 As the Playoffs have whittled themselves down to 4 teams, it's interesting to see the resolve necessary for an extended playoff run.  All four teams should be lauded for not only opportunizing on minute mistakes, but for buckling down with every inch of intestinal fortitude they can muster.  As we live and die with our teams, no other sport exhibits the sacrifice exuded by these warriors more blatantly  than playoff hockey.  Teeth are lost.  Bones are broken.  Testic..... Well, you get the point.   I am reminded each playoffs that  all NHL players ( even the ones I hate)  are the gutsiest people on the planet. You can't help but to respect and admire that.

San Jose and Chicago start tomorrow, with an improbable 12pm PST start time. Seeing as I am originally from San Jose, you are all safe from Jordo's Flyers pics at the top of the page. No promises come Monday, but consider yourself on an orange break 'til then. Interesting to see how many people are picking Chicago over San Jose, but I think the underdog role suits them well.  I think it's safe to say that after destroying Detroit, they've officially got that monkey off their throat ( *wink wink, nudge nudge*).  What's that you say?  You want 10 facts about the matchup? Ryan lambert at Puck Daddy's got you covered.

As for Philly and Montreal, it's a battle of Cinderella playoff runs.  Who didn't watch that monumental comeback against Boston yesterday and walk away from their TVs with their jaw on the floor?  Congrats, Flyers.  You really pulled that one out of your [ Avery ] . Montreal's been riding  Jaroslav Halak's insane goaltending like a scorpion on a frog.  It's only a matter of time before they get stung, in my opinion.  Also, I figure if I pick the Flyers, karma might get me a date.   That being said, I'll take the Flyers in 6.   No, wait. Make it  5.  No, 3.   Anything for the blonde.

So, let's talk about our beloved 'Yotes.  I think a few people expected me to come on here and bash Winnipeg after the hearty stream of hate strewn about the site from diehard 'Peggers.  Because after all, it's Travis, Jordan and myself who are to blame for the Jets leaving town.  We apologize, and won't say anything bad about you. Greg Esposito will though.   And we promise not to laugh.  We pride ourselves on being classy here at FFH, and even though you've said some really not-nice things about us lately, We would never rub the joy of keeping our team in your faces, especially after how wonderfully you've treated us. 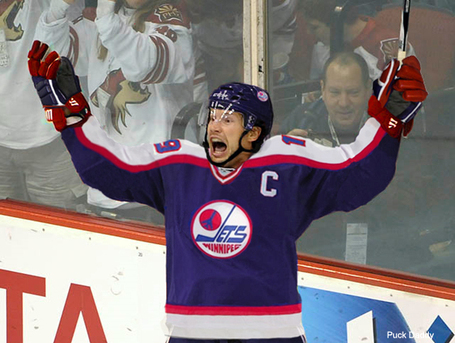 After the jump, more musings, and another Phoenix hockey player goes pro. And this time, (*gasp*)  it's a girl!

•   A couple of weeks ago, I asked for your photoshopped submissions for new Coyotes jerseys.  After all, we're supposedly losing the 'Phoenix' label and allegedly calling them the "Arizona Coyotes" or the ( BARF) 'Glendale Coyotes".  Let's be honest. Who here would wear anythintg that says Glendale on it after all the bullstucky they've put us through in recent weeks/months/years ?    Not this Ghost.  I am still leaving the invitation open for submissions, as I'd like to get a gallery of concept art started.  Need a little inspiration?   Icethetics has a little Jets/Coyotes concept gallery posted, and you can check it out by clicking here.

•   Before everyone razzes the Boston Bruins and Vancouver Canucks to death, their own bloggers explain the collapses from the respective home teams' perspectives. ( From The Rink )

•  Lastly, a thing that peeved a lot of us this week was the accusation that no one in Arizona knows how to skate. Obviously, I don't have anything to prove to anyone, as I am a professional hockey and figure skating instructor by trade.  Other 'Yotes fans have chimed in with proof of up and coming talent from our area, but I'd like to point out a friend of mine who I had to say goodbye to this afternoon: 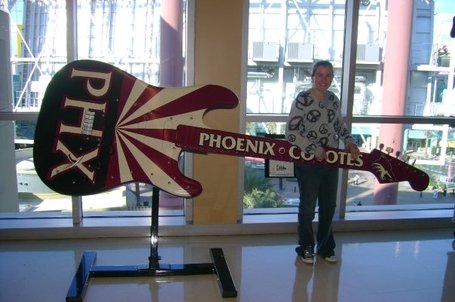 Chelsea worked at my rink, and I've never met a female goalie with the work ethic of this kid. After playing games on end all night, she'd regularly be seen doing "pop-ups" ( getting to her feet from her knees) between whistles. Not because it's fun, but because her tireless work ethic drives her to succeed.  Chelsea's represented the USA in all-female amateur tournaments overseas, going to such faraway places such as Spain, Germany, Canada, and Sweden. 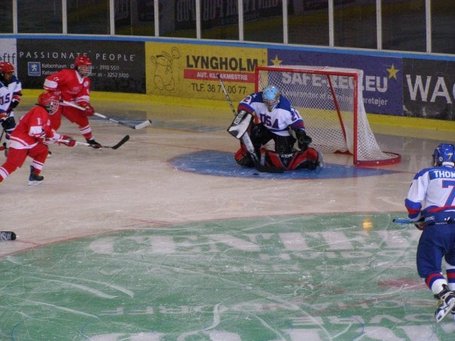 Today, I had to say goodbye to my friend, as she's signed her first PRO (!) contract.  She's moving to Sweden, and they'll be paying her in meatballs and bikini clad blondes  actual money to play hockey. Another homegrown kid, living the dream.  I gave her my old number 42 jersey that I wore in Juniors back in the day for luck, and she promised to send me some cool Swedish league jerseys as she tours all over Sweden.  Congrats, Chels.  Everyone at FFH will be rooting for you.  Make all of  us proud! 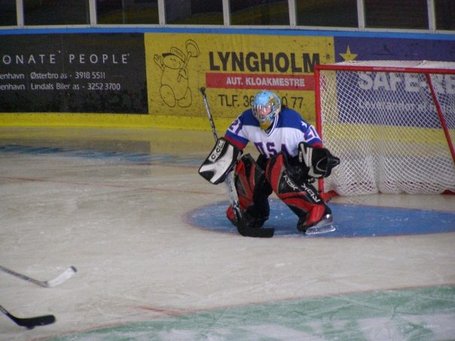 Leave your Conference Finals picks after the beep.