EDITOR'S NOTE: With the big seventh game tonight, we asked noted Detroit hater Brad Lee from St. Louis Game Time to pull some strings and bring in a few motivational speakers to get the Coyotes fired up for tonight's game.And through the wonders of modern surveillance equipment, we'll allow you inside the dressing room to hear it too.

Good morning, men. We've got a few surprises for the team today. Hopefully we can get everyone around here good and fired up before the decisive game with the Red Wings. Up first before the morning skate, we've hired a professional motivational speaker to make sure you're in the right frame of mind to prepare for tonight. Matt? 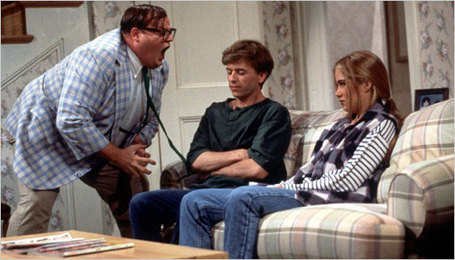 Hello there. My name is Matt Foley. I am a motivational speaker. As your probably heard, I'm here to make sure you guys don't screw up tonight. First of all, you should know a little bit about me.

I am 35 years old, I am thrice divorced...and I live in a van down by the Salt River. Now you may be asking yourself why a guy who looks like me is talking to a bunch of guys who look like you. Shut your pie holes for a minute and I'll tell you why.

Oh sure, you don't have a care in the world. You lose tonight and tomorrow you're driving around in your expensive cars, eating at nice restaurants and sleeping in your million dollar homes with comfortable beds with no fear of desert snakes crawling into your living room on wheels. But if you don't hit those Red Wings in the face and play hard tonight...well then you might as well move into a VAN DOWN BY THE RIVER! And where will you be then? I'll tell you. You'll be on a steady diet of government cheese and used Pall Malls wondering what happened to your shattered life. Trust me, you don't want that.

I can't see too good. The guy with the undisclosed injury, is that Mario Lemieux? NO! It's Shane Doan! That guy can't do it by himself. He needs help. Asking him to win the game by himself against Detroit is like asking a guy who lives in a van down by the river to have a meaningful relationship with a woman who isn't a hooker.

Now you Coyotes players, I want you to get fired up. I want you excited. You can beat these Red Wings. You can check those soft Euro players and keep them off the scoreboard. You can piss off all the Canadian media and that guy who invented the raspberry phone and advance in the playoffs. And if you lose tonight, I might have to move in with you to make sure you learn your lesson. My bags are packed. If you don't want that, then go out there and kick some ass! Let's go morning skate!

(turns to run towards door, collides with folding table breaking it in two)