Over the past week, Travis Hair, Moridin, and myself have all flopped around some emails regarding the sale of The Coyotes. The main reason for this conversation was so that I could write up a little piece with some different viewpoints about our beloved Phoenix Coyotes. A fireside chat, if you will. As I started to piece this together, I did a little searching around the series of tubes known as the inter-webs, and stumbled across a few different articles. Obviously, I was pleased to find optimistic articles stating that it was only a matter of days before Ice Edge struck a deal with the City of Glendale, and we could truly call the Coyotes "ours" for the long haul. And then I ran into a Scott Burnside article on ESPN.com:

Now I've always been the first to jump on the soapbox about certain sportswriters' coverage of anything west of the Rockies, but after reading Burnside's article, then this from Ice Edge's COO on Toronto radio; ( http://phoenix.fanster.com/2010/03/16/ice-edge-coo-daryl-jones-sends-message-glendale-canadian-radio/ ), my thoughts and opinions have swayed from optimistic to 'Holy Hell, here we go again".

Fast forward to tonight, March 19th. While watching "The Hot Stove" between periods of the Leafs/Habs stint tonight, ESPN's Pierre Lebrun pops on and says "Rumor has it that Ice Edge Holdings may not even be the frontrunner for the Coyotes anymore. Jerry Reinsdorf, owner of the Chicago White Sox, is back in the picture and seems poised to make a push for the Coyotes. Regardless, if this doesn't get cleared up by May, we may be talking about a relocation". Without going into too much detail, I will just say that I need a new TV, a new window, and I owe my neighbor an apology about her cat. I know I am not alone while feeling jerked around here, but from this point on, there will be no mention of Travis Hair, Moridin, or anyone from the Five For Howling Community. What was once supposed to be a nice little fireside chat between adults acting civil will now be a rant to all you so-called "hockey experts". I figure, if you want to waste everyone's time with your despariging commentary, you better get your facts straight about Phoenix. Here's my little love letter to you: 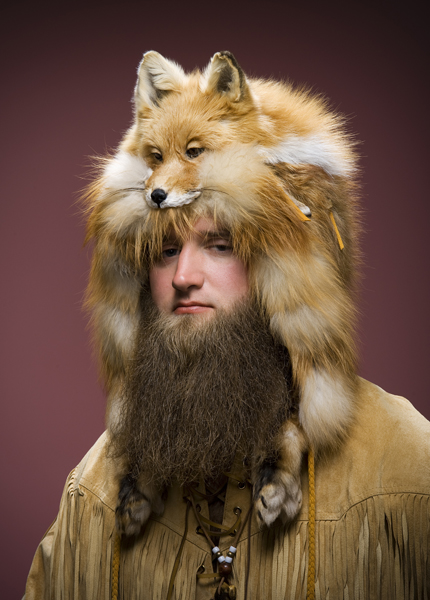 Greetings, all hockey related people. Allow me to introduce myself. My name is Joel, and I am currently a Phoenix Coyotes season ticket holder of 5 years. I have played hockey since I still had baby teeth, and am transplanted to Arizona from San Jose, California. I have watched, played, and written about hockey all my life. If you haven't noticed by now, I am hardly the epitome of journalistic perfection. I apologize for that, but you must realize that after multiple seasons of futility in the desert, I am one of the few people with a voice who will tell you what you don't want to hear. Yes, there are diehard Coyotes fans here in Phoenix. And yes, we've read your verbal diarrhea for over a year. And respectfully, we've just smiled and let you flap your gums. And now here you are, 'surprised' that Phoenix is having it's most productive season in Jets/Coyotes history.

All season long I have followed every sports page, every blog, every podcast, and every bulletin board as it has pertained to the Phoenix Coyotes. I've heard every joke, every below-the-belt comment, and every rant that would tear down Phoenix. Early in the season, I even made my own rant on this very website chastising Phoenix fans for being so fairweather, and not showing proper 'rabid hockey fan etiquette'. And while I still won't apologize for that article, I will apologize to those fans who felt the way I do now.

Since the inception of the "Wayne Gretzky : Pet Detective Coach" era, the Phoenix franchise has cut corners by coming up with catchy euphimisms for 'we're cheapskates". These phrases include 'rebuilding phase", 'youth movement", and "adapting to the system". Well, after years of this, fans had heard enough. Season ticket prices rose, while the on-ice product could best be described as 'flushable". Add the looming threat and blatantly vomit-inducing tactics of Jim Ballsillie, and fans could do nothing but feel as if the franchise really didn't give a (Sean Avery) about them. The fanbase felt like a Pomeranian on a hook, slowly being dipped into a tank of starving pirahnas. And rightfully so. After all the empty promises from the Gretzky Era, believing anything that was tossed at you like bait usually elicited a response of "Burn me once / Burn me twice..etc..etc...". 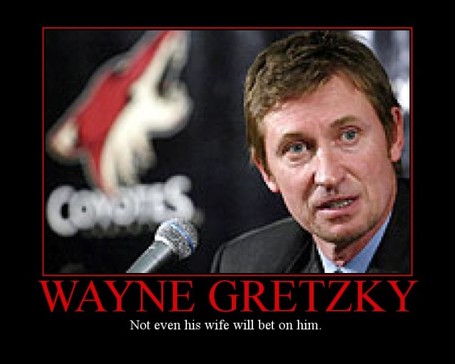 If you still don't get it, let me make this comparison -

What if I told you that I had a friend who ( for a small fee) would let you have a Ferrari limousine, complete with driver? Sounds pretty sweet, right? Now, there are some stipulations. This limo has all new parts, never been tested, but eventually they'll be totally reliable and trustworthy. At least, we think they will. The rims we used to have on it were nice and chrome, but now we have doughnuts on it, and the sound system is crap. Oh, and the limo driver? He used to race NASCAR, but now he's totally blind and has bouts of narcolepsy. Still want in?

( If you jumped out of your chair with a resounding 'YES!", you'd be one of the few people who would have let Wayne Gretzky drive their limo, and would be prime candidates for season tickets for the 'Yotes of yesteryear. )

Now what if I told you that 'my friend' who gave you the limo wanted to take your small fee, raise it, so he could soup the limo back up? But as soon as he had your money and the limo was looking pristine again, he was going to take the limo and drop you in the worst neighborhood in town, butt-naked on the street. Oh, and since he's taking his pimped out ride with him, might as well get a driver that can see, and has a spotless DMV record. At what point in this last statement did you say ' Who in their right mind would do this"?

( If you're still onboard, you're probably sitting next to me in the lower bowl of Jobing.com arena) 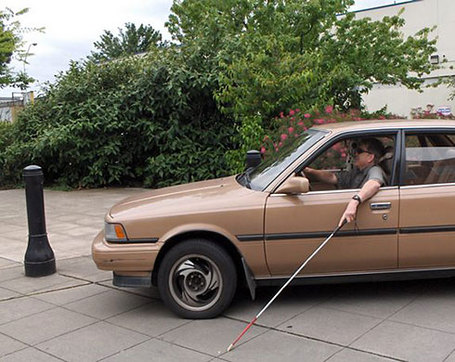 You see, North America (sportswriters, critics, "experts"), this is the situation. Phoenix has a dinged-up limousine with a competent driver, a new paint job, and some pretty decent rims. What no one has noticed all year is what's under the hood. Phoenix fans know. Ever since the metaphorical 'nitrous injection' of a trade deadline, we've been waiting for all of you to act like ditzy drunks, begging for rides as you stumble out of the club. What do you expect us ardent fans to say? ...... "Hop in" ?

Realize that even now, after this season is over, our pimped out ride is still being dangled over the ocean. And yes, it's still extremely disheartening. 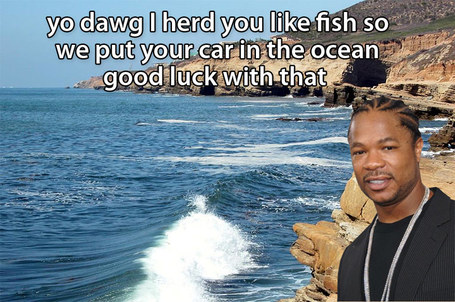 We don't want optimism, as Phoenix fans. We want our team. Period. The team wants action and commitment from it's fans? Okay, you first. We were left in limbo last year, and it drove people off. What do you honestly think will happen if this situation occurs again? Food for thought, people. It's rhetorical.

And here we are. Every story Coyotes fans read today is about the on-ice, 'Cinderella Coyotes". Truth be told, there's nothing magical about them. Maybe if you paid attention to what's been going on with the on-ice product, instead of blasting and nitpicking anything you could, you wouldn't be sitting here with your jaw on the ground. Ask Coyotes Play-by-Play guy, Dave Strader. Ask Darren Pang, color man for the Blues (and all things NHL) . They seem to be the only people with a journalistic voice NOT surprised by the success of The Desert Dogs. Then again, they're probably too busy to make long-winded articles about the terrible fanbase in Phoenix, and the team should move because "hockey will never work in the desert" .

To quote someone from an ESPN article named 'SierraAZ09' : " Take a team that's been mismanaged for years, with no star power a little TV revenue, and you get bottom five attendance figures and 3,400 season ticket holders".. Sad. Sad. Sad.

( Too bad he was talking about Chicago. Maybe we should think about relocating them. Hockey will never work there, right? )

I know I'm impatient about solidifying the Phoenix Coyotes as our own. And I know a lot of Phoenix fans are too. I guess for a lot of us, the feeling of being handcuffed to the NHL is embarassing. Being put into a situation of "forced optimism" is definitely not our forte. But if if forced optimism is what you want, then I guess all I can say is....