The Importance of Defensive Goal Scoring to the Phoenix Coyotes

Share All sharing options for: The Importance of Defensive Goal Scoring to the Phoenix Coyotes

We've heard the stat more than a few times now about how the Coyotes lead the league in goals from the blueline. Now with an impressive 36 goals, the defense has really made an impact on how the Coyotes have fared this season. It's impressive all on it's own to have your defense score as much as ours is, but they also have a habit of making those goals count for something. After doing some painstaking defense tracking, since I couldn't find the numbers elsewhere, when any defensive player scores the Coyotes are 21-6-1. When they don't? 16-16-5. That "Wins with Defender Scoring" mark doesn't even include the two games that Adrian Aucoin recently won in the shootout since he officially didn't get credit for the goals. Let's say we do include them. That puts the record with DGoals scored to 23-6-1 and without DGoals scored to 14-16-5.

Now there are plenty of reasons why those numbers are true. When the team in general plays better the defense is able to get involved more in the play and can therefore get more chances. Also with the team playing more confidently, the defense isn't scrambling to get back to the line every time. The defensive system Dave Tippet has employed makes it so that a forward can rotate out to cover the point on the pinches.But I think that we can all agree that the team and their record looks significantly different when the defense gets involved. If the Coyotes are going to be serious players this off season, they'll need to continue this impressive output.

The two players largely responsible have been Keith Yandle and Ed Jovanovski. Both have 10 goals a piece and have really been much improved from last season. While both have made defensive mistakes this season it's been far less than in previous years. Yandle now looks confident with the puck and will charge into the offensive zone all on his own if the forwards can't get open. He'll also pinch at just the right time to get behind opposing defensemen without them even realizing it for a goal. Jovanovski has been more willing to blast shots from the point and lately has been rotated to more of a winger spot on the power play to park himself in front. It's too soon to know if that will pay dividends yet though.

Charts after the break!

What's even more impressive is just how much of the scoring is coming from the back end. Nearly a quarter of the goals we've scored this year (or 22.5 % to be precise)  are from defensive players. And boy do we need it. The Coyotes are near the bottom in total goal scoring, but #1 by a significant margin in Defensive goals. Here's the graph of just how much of each NHL team's goals come from the blueline. You can see just how important our D men are when you take a look at just how many total goals other teams are getting. Without the production we've gotten the Coyotes would be no where near the playoff team the look to be as we enter the Olympic break. 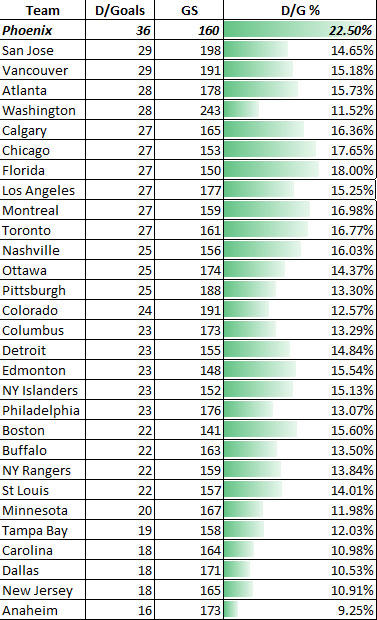