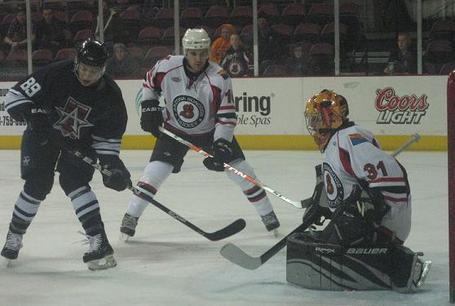 After the disappointment of the Thanksgiving homestand, the Arizona Sundogs hit the road once more for the first part of a six game road trip. Unlike the previous extended road trip, this one would pit the Sundogs against familiar teams. Once more the road would prove a comfortable setting as the Sundogs would collect five out of a possible eight points.

Arizona opened the road trip on Thursday in Texas against the Laredo Bucks. Sundogs' forward Kyle Hood got his first goal of the season and eleventh point as he redirected a rebound past the Bucks' goalie midway through the first period. The second period was scoreless and the Sundogs held Laredo off the scoreboard until 14:41 of the third period. Tied at the end of regulation, the teams would also remain tied at the end of overtime as the game went into a shootout. Laredo would score once in the shootout, while Arizona would be unable to get one past the Bucks' netminder. Arizona would total 27 shots on the night and goalie Levente Szuper faced 30 Laredo shots.

The Sundogs would then make the bus ride down to Hidalgo for back-to-back games against the Rio Grande Valley Killer Bees. On Friday, Arizona defenseman Billy Bezeau would extend his point streak to three games with the opening goal at 16:42 of the first period. Sundogs' special teams would continue their hot streak as forward Cam Keith would collect a powerplay goal late in the first. The second period would belong to the Killer Bees however, as they would score three unanswered goals in the frame. Down a goal and on the penalty kill, Arizona would get some help from the Killer Bees as one their players batted the puck into his own net, tying the game. Sundogs' forward Jason Williams would be credited with the shorthanded goal. The Sundogs would then go on the powerplay as a result of a Rio Grande Valley major penalty and forward Joey Sides would find the back of the net for the eventual game-winning goal. Arizona would total 39 shots on the night and goalie Doug Groenestege turned away 35 of the 38 Killer Bees' shots.

The teams would face off again on Saturday night and this time the night would belong wholly to the Sundogs. Forward Joey Sides picked up where Arizona left off the night before, scoring a goal just 1:16 into the first period. Special teams would begin the scoring in the second period with a goal by forward Jason Visser and then another by forward Luke Erickson; both in the first five minutes. Sundogs' defenseman Billy Bezeau would continue his point streak with an even strength goal at 18:45 of the second. Arizona forward Karl Sellan would lift one over the Killer Bees' goalie just 12 seconds later, giving the Sundogs a five goal lead at the end of two periods. Joey Sides would collect his second of the night with a shorthanded goal at 3:16 of the third period. The Killer Bees would spoil the shutout bid with a powerplay goal at 6:58 of the third. The powerplay would shine once more for Arizona as forward Luke Erickson would score with the man-advantage at 14:02. The seven goals are the most scored by the Sundogs in any game this season. Arizona would total 25 shots on the night and goalie Levente Szuper faced 39 shots by the Killer Bees.

Playing a rare Tuesday night game, the Sundogs would face the Odessa Jackalopes for the first time this season. Once more Arizona's special teams would open the scoring as forward Luke Ericson collected a goal early in the first. Odessa would score midway through the period and the teams would go into the first intermission tied. The Jackalopes would then tally three unanswered goals in the second period before Sundogs' defenseman Jim Driscoll would shoot a backhander past Odessa's netminder to cut their lead to two. Arizona captain and defenseman Tyler Butler would score on the powerplay at 15:22 of the third, but Odessa would score the game winner shorthanded less than a minute later. The regulation loss was the Sundogs' first in their last nine road games. Arizona would total 38 shots on the night and goalie Levente Szuper faced 35 Odessa shots.

On December 2nd, the Sundogs activated forward Karl Sellan off the injured reserve and placed forward Samuel Grenache on the 10-day IR retroactive to November 27th.

Special teams have continued to improve; Arizona now has a 17.24 powerplay percentage for the season and a penalty kill percentage of 80.29.

Goalie Levente Szuper was honored as the Oakley CHL Goalie of the Week for the period ending December 5, 2010. This is the second time in the last three weeks that Szuper has received this award. In his nine games with Arizona, Szuper has a 4-3-2 record, a 2.39 GAA, and .931 SV%.

The Sundogs will wrap up the road trip a game against the Laredo Bucks on Friday night and one against the Rio Grande Valley Killer Bees on Saturday night.