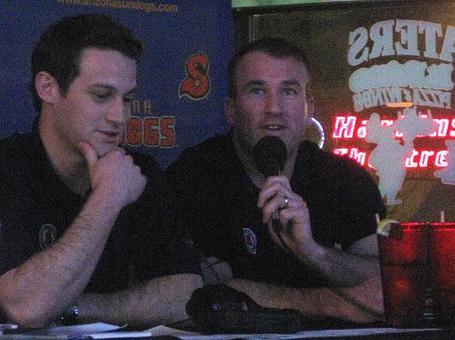 Joey Sides and captain Tyler Butler at the Coach's Show

The Christmas break made for a light schedule, with the Sundogs having only one game this week. Arizona finished a short road trip with a stop in Loveland to take on the Colorado Eagles on Wednesday night.

The first period belonged to the Eagles as they scored three goals in the first nine minutes. Sundogs' forward Joey Sides scored on the powerplay at 12:39 of the first, but the Eagles would collect two more before the end of the period. Sides would score again on the powerplay early in the second period, but Colorado would get the goal back a few minutes later. Special teams would continue to shine for Arizona as forwards Jason Williams and Luke Erickson would each score on the powerplay before the end of the second period. The Eagles would score early in the third, but the Sundogs didn't back down as they tried to mount a comeback. Forward Jason Visser would score his third goal of the season with a shot as he was falling to the ice. Luke Erickson would get his second of the night midway through the third, but the Eagles would hold onto the one goal lead to come away with the 7-6 victory. Arizona would total 44 shots in the game. Goalie Levente Szuper would start the game in net, but would be pulled at the end of the first after giving up 5 goals on 17 shots. Bobby Jarosz would play the last two periods and make 23 saves on the 25 shots he faced.

The Sundogs have announced the dates for their 5th Annual Ladies' Nights. The first will take place at the Pine Cone Inn in Prescott on January 10th. The second will be at Tim's Toyota Center on February 8th. Each event will consist of dinner with Sundogs players, interactive presentations, a player auction, contests, raffle and door prizes, and attendees will also receive gifts courtesy valued at $200. Ticket prices for each event are $40 for season ticket holders and $50 for non-season ticket holders, non-season ticket holder admission includes a ticket to an upcoming Sundogs home game. Attendees must be 18 years of age or older.