Dog Caller - December 16, 2010 - Sundogs still hot on the road and bringing the heat back home

Share All sharing options for: Dog Caller - December 16, 2010 - Sundogs still hot on the road and bringing the heat back home 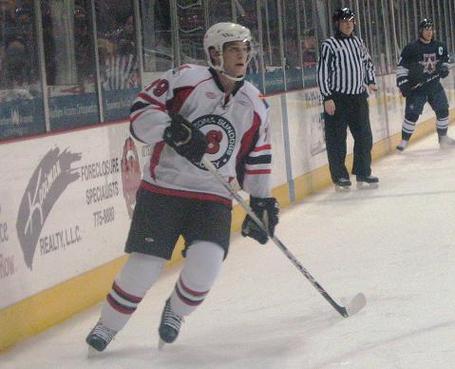 With the end of a long road trip looming, the Sundogs looked to continue their role as Road Kings and then bring their hot streak back to home ice.

On Friday night, Arizona would face off against the Laredo Bucks for the second time this season. Sundogs' forward Kyle Hood would get on the board early when he skated behind the net and then sent a wrist shot past the Laredo goalie just 21 seconds into the contest. Sundogs' special teams would strike as forward Joey Sides would score on the 5-on-3 powerplay at 5:45 of the first. The goal would be Sides' eighth point in the last four games. Laredo would score midway through the second period, but Arizona would hold them off for the rest of the game and come away with the 2-1 win. The Sundogs would total 21 shots on the night and goalie Doug Groenestege would face a total of 33 shots.

Saturday night would see Arizona face the Rio Grande Valley Killer Bees for the third time in the last five games. Forward Mark Kolanos would get the Sundogs on the board in the first as his shot would be redirected off a broken stick on the ice and into the net. Arizona forward Luke Erickson would extend the lead to two when he pushed a rebound past the Killer Bees' goalie early in the second period. Rio Grande Valley would score two goals in the second to tie the game and both teams would be scoreless in the third, sending the game to overtime. Arizona forward Mark Kolanos would collect his team-leading third game-winning goal just 1:23 into OT, giving the Sundogs' the 3-2 win. The Sundogs would total 32 shots on the night and goalie Levente Szuper would face a total of 31 shots. Arizona would finish its six game road trip 4-1-1.

Playing their first game on home ice since Thanksgiving, the Sundogs would face the defending President's Cup champion Rapid City Rush on Wednesday night. The Rush would get the only goal in the first, a late period tally just as an Arizona penalty came to an end. The Sundogs would strike early in the second though as forward Kyle Hood would score 21 seconds into the period. Arizona would then take the lead late in the second as forward Luke Erickson would collect his first of the night. Midway through the third, forward Kyle Hood would get his second of the night and extend the Sundogs' lead to two. With time running out in the third, Rapid City would pull their goalie for a 2-man advantage on the powerplay. Arizona forward Luke Erickson would get his second of the night as his shot down the ice would slide cleanly into the open net for a shorthanded tally. The Rush would collect a goal on the same powerplay, but Arizona would come away with the 4-2 win. The Sundogs would total 37 shots on the night and goalie Levente Szuper would face a total of 40 shots.

Arizona (11-10-3) is currently in fourth place in the Berry Conference and is tied for sixth place overall in the CHL.

On December 18th, the Sundogs will host their second annual Teddy Bear Toss. Fans will throw teddy bears and other stuffed animals onto the ice after the Sundogs score their first goal; the toys will be donated to Toys for Tots and other local non-profit charities.