Dog Caller - December 1, 2010 - Special teams the bright light in a turkey of a homestand

Share All sharing options for: Dog Caller - December 1, 2010 - Special teams the bright light in a turkey of a homestand 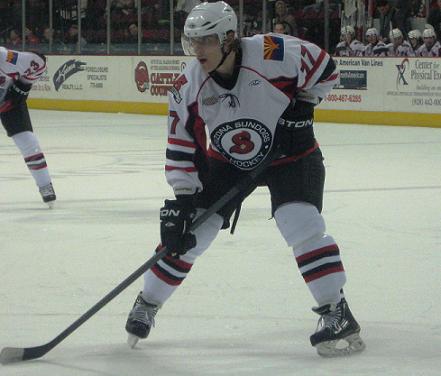 After a season-long eight game road trip, the Arizona Sundogs celebrated Thanksgiving with a three game homestand against the Allen Americans. The Americans came into the series leading the CHL in points, but the Sundogs were riding a three game winning streak and had gotten points in their last five games.

Wednesday night's game got off to a great start for the Sundogs as they held the Americans scoreless in the first period while also collecting goals by forwards Mark Kolanos and Luke Erickson. Allen would then score four unanswered goals, once in the second and three times in the third, to come away with the 4-2 win. Arizona goalie Levente Szuper faced 37 shots on the night.

The teams faced off again on Friday night and the game was a display of special teams prowess by the Sundogs. Allen would open the scoring halfway through the first period, but Arizona forward Mark Kolanos would collect his first of the night on a powerplay late in the same period. While Sundogs' forward Samuel Grenache sat in the sin bin for slashing, Arizona forward and newcomer Corey Laurysen scored a shorthanded goal at 12:54 of the second period. Laurysen collected a pass from forward Joey Sides on a 2-on-1 down the ice and sent a wrist shot past the Allen goalie for the Sundogs' second shorthanded goal of the season. Mark Kolanos would collect his second of the night on an even-strength tally late in the second. Arizona forward Cam Keith would score twice on the powerplay in the third period, both shots coming from right in front of the net, and the Sundogs would come away with the 5-1 victory. Arizona goalie Doug Groenestege would face 31 shots on the night.

Saturday night the teams met for the final game of the series with Arizona looking for its first back-to-back home wins of the season; unfortunately Allen had other plans. The Americans would score twice on the powerplay in the first period, while keeping the Sundogs scoreless. Arizona forward Jason Visser would collect his first goal since being activated from the IR while the Sundogs were on the powerplay early in the second period. Allen would score the next two before Sundogs' forward Adam Smyth would prove he can do more than fight and score his first of the night late in the second. Smyth would score again midway through the third, but any Arizona comeback was denied as the Americans would score twice more in the third. Sundogs' goalie Doug Groenestege would face 37 shots on the night.

Hair of the Dogs

The home woes are nothing new to the Sundogs and their fans as the team managed only 9 wins out of 32 home games last season. Filling the stands is hard enough in the economic climate of today, something that the team addressed this season by significantly lowering ticket prices across the board, but if the team can't win at home it only makes the process that much harder. As a fan it can be hard to figure out why it is the team seems to do so much better on the road. In the last three games the play was so up and down it was hard to tell if it was the Sundogs that were the cause or if it was the fact that they were facing one of the top teams in the league and getting the one blowout win was due to poor play by Allen.

Arizona is currently in 7th place in the Berry Conference and is 16th out 18 teams in the CHL, having collected 14 points this season. Sundogs' special teams started out slow this year, but have been on the rise of late. The team has a 15.25 powerplay percentage for the season and a penalty kill percentage of 78.95.

Even with his time on IR, forward Adam Smyth still leads the CHL in penalty minutes with 97 PIM collected in 12 games.

Captain Tyler Butler has scored the most points as a Sundog this season with 13 (3G,10A).

The Sundogs' Coachs' Show was on the air for the second time this season on Tuesday, November 30th. This week Assistant Coach Chris Bartolone headlined the night, with guest players Luke Erickson and Cam Keith.

SundogsTV will air its first episode this upcoming Saturday, December 4th at 11am on AZ-TV channel 7, cable channel 13. SundogsTV is a half-hour show dedicated fully to the Arizona Sundogs on and off the ice and is hosted by the team's radio announcer Scott Studdert.

Arizona hits the road again for the first three games in a six game road trip. The Sundogs will face the Laredo Bucks on Thursday before back-to-back games against the Rio Grande Valley Killer Bees on Friday and Saturday.