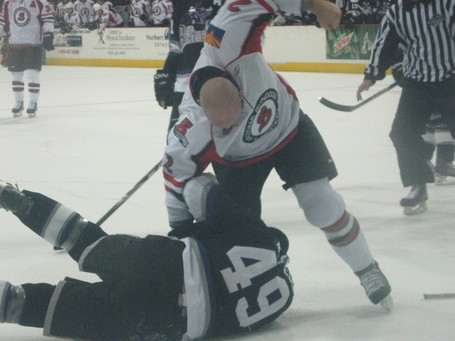 This past week was filled with emotional highs and lows for the Arizona Sundogs and their fans with roster moves, back-to-back games against the Texas Brahmas, and the retirement of former captain Chris Bartolone's number.

Fans are having that all too familiar feeling as already the Sundogs' IR list is filling up. Forward Torren Delforte was moved from 10-day to 30-day IR on October 29th; the same day that forwards Jason Visser and Joey Sides were placed on 10-day IR. Continuing the roster moves, Arizona waived defenseman Yan Turcotte and forward Chase Watson while adding defenseman Maxime Renaud and forwards Marc-Andre Labelle and former Sundog Kyle Hood.

For the third straight week, the Sundogs faced off against a team in back-to-back contests; this time at home against the Texas Brahmas. The Brahmas joined the CHL in 2007 and won the Southeast Division, Southern Conference and eventually the Ray Miron cup in the 2008-2009 season. The scoring in Friday night's game got underway 7:20 into the first period when Texas got one past Arizona goalie Doug Groenestege. Sundogs' forward Jason Williams continued his hot streak netting a powerplay goal at 13:29 of the first. Williams would finish the night with two powerplay goals and forward Mark Kolanos netted an even-strength goal, but their efforts were not enough as the Sundogs would fall to the Brahmas 5-3. Arizona's penalty kill was perfect on the night as Texas was denied a goal on eight powerplay opportunities.

Saturday's game was a penalty filled affair with Texas racking up a total of 40 minutes on 13 infractions and Arizona a total of 22 minutes on 8 infractions. Texas capitalized on three of its four powerplay opportunities, while the Sundogs only managed one goal in its eight powerplay opportunities. The Brahmas topped Arizona 5-3 for the second straight night. Sundogs' goalie Bobby Jarosz faced 32 shots. Arizona newcomer Maxime Renaud got his first goal for the Sundogs at 2:44 of the third period. 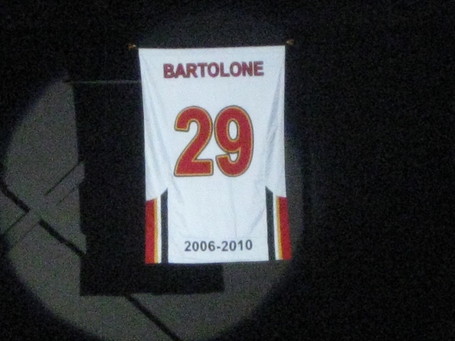 October 29th was a night dedicated to former Sundogs' captain, and current assistant coach, Chris Bartolone as the team retired his number. The 20-year pro's number 29 jersey was unveiled hanging from the rafters in a pregame ceremony. Bartolone scored the first goal in Sundogs' history on October 20, 2006 in a 6-3 win over the Rio Grande Valley Killer Bees and ranks first all-time in games played (260), assists (182), points (238), power-play goals (42) and shots (857) for the Sundogs. Bartolone co-owns the franchise record for most assists in a single game (4) and shares the second-longest goal scoring streak in team history at five games. Bartolone led the team in power play goals in 2006-07 (12) and twice led the team in assists in a single season (2006-07, 2008-09). Last season Bartolone appeared in his 1,000th professional game against the Tulsa Oilers on December 13th, 2009. During the Sundogs' championship season Bartolone finished tied for fourth in scoring among CHL defensemen with 52 points (11g/41a) in 64 appearances and in the playoffs finished first among defensemen in scoring and fourth overall with 19 points (5g/14a) in 17 games. The Michigan native participated in nine World Championships in Italy, Sweden, Austria and Finland, played for eight seasons in the German Elite League (DEL) and skated for Team Italy during the 1998 Winter Olympics in Nagano, Japan.

The Sundogs go on the road for their next eight games to face the Wichita Thunder, Texas Brahmas, Evansville Icemen, Dayton Gems, Quad City Mallards, Fort Wayne Komets, and the Bloomington Prairie Thunder twice. On November 24th Arizona will return home for three straight games against the Allen Americans.