Share All sharing options for: Dog Caller - November 24, 2010 - Goalie on a hot streak, 3 straight wins, & the end of the road trip; for this we are thankful 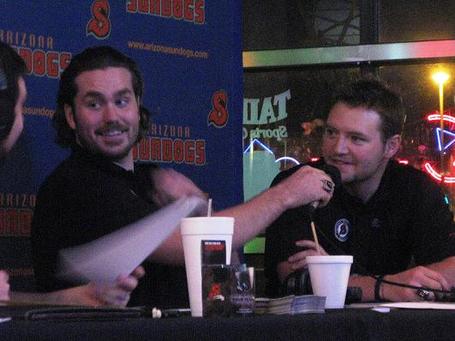 After five straight regulation losses, the Sundogs had begun to turn it around by getting points in back-to-back overtime losses and outlooks were improving. Arizona had two games against the Bloomington Prairie Thunder and one against the Fort Wayne Komets to wrap up its eight game road trip.

The Sundogs faced off first against the Prairie Thunder on Wednesday night, and Arizona took a 2-0 lead with a powerplay goal by forward Cam Keith and an even strength tally by forward Jason Williams; both in the second period. Bloomington netted its first goal late in the second period, and with the goalie pulled for the extra attacker in the third, tied the game with 16 seconds left. Overtime went scoreless and Arizona went into a shootout for the second time in its last three games. Bloomington got just one goal in the shootout, while forwards Kyle Hood and newly acquired Luke Erickson both scored for Arizona; breaking the eight game winless streak. Sundogs' goalie Levente Szuper faced 43 total shots on the night.

Arizona then traveled to Fort Wayne, Indiana to face off against the Komets on Friday night. The Sundogs opened the scoring with a goal by forward Luke Erickson at 3:42 of the first period. Arizona took a 2-0 lead for the second straight game on a goal by forward Cam Keith midway through the second. The Komets cut the lead in half with a goal towards the end of the middle frame. Sundogs' forward Luke Erickson got his second goal, and the eventual game winner, in the third as Fort Wayne would only net one more on the night. Arizona goalie Levente Szuper made 37 saves on 39 shots, including one on a Fort Wayne penalty shot in the second period.

The Sundogs returned to Bloomington for a mid-afternoon contest on Sunday. For the fourth straight game Arizona held its opponent scoreless in the first period. Sundogs' forward Joey Sides broke his scoring drought with a goal in the second period. Arizona defenseman Jim Driscoll would get his first goal as a professional when he got one past the Bloomington goalie just 29 seconds into the third period. The Prairie Thunder pulled their goalie for the extra attacker on a powerplay late in the third period and eventually got a goal, spoiling the shutout for Sundogs' goalie Levente Szuper. Szuper faced a total of 31 shots on the night.

Forwards Jason Visser and Adam Smyth have both been activated off of I.R.. Forward Joel Irving has been activated from a leave of absence granted him by the league.

Rookie forward Marc-Andre Labelle has been placed on 10-dy I.R. retroactive to November 21 and defenseman Clayton Barthel has been moved from 10-day to 30-day I.R.

Sundogs' goalie Levente Szuper was named the Oakley CHL Goalie of the Week for the period ending November 21, 2010. Szuper collected three wins in the three contests that week, turning aside 108 of 113 shots for a .956 save percentage.

The Arizona Sundogs Coach's show returned to the air on Tuesday November 23. Sundogs' radio announcer Scott Studdert and head coach Marco Pietroniro welcomed forwards Jason Visser and Kyle Hood to the show, which was broadcast live from Tailgaters Sports Grill in Prescott Valley on KQNA 1130AM. The live audience and those listening on the radio heard the head coach and players recap the season so far, discuss the high number of injuries this year, the long road trip, and many personal anecdotes. The next schedule show will be on November 30; guests have not yet been announced.