Share All sharing options for: Dog Caller - November 17, 2010 - Still On The Road, But Turning Things Around 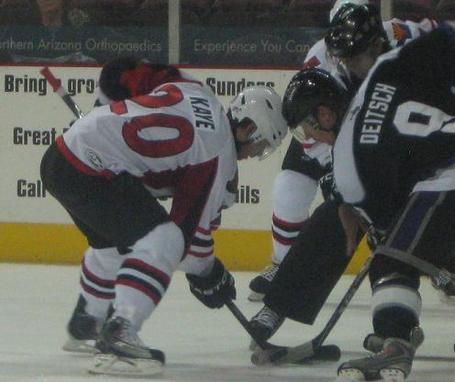 The Arizona Sundogs had three games in three straight nights as they continued their season-long eight game road trip against former IHL teams; against teams that they would be seeing for first and the only time this season.

On Thursday, Arizona played the Evansville Icemen. Arizona forward Steve Kaye got the Sundogs' only goal for the game in the first period, while Evansville totaled eight goals on the night. Six of the Icemen's goals were scored by special teams; five on the powerplay and one shorthanded. Sundogs' goalie Doug Groenestege faced 27 shots on the night.

Friday night saw the Sundogs face off against the Dayton Gems. For the first time all season Arizona was able to hold an opposing team scoreless in the first period; though they failed to score themselves also. Dayton would get three goals in the second period; two on the powerplay. Arizona would score twice as well in the second period; forward Karl Sellan on the powerplay and forward Adam Smyth even strength. The third period would go scoreless until the 19:53 mark when Arizona forward Mark Kolanos would tie the game with a powerplay goal. A scoreless overtime sent the teams into a shootout. The first two of five shooters would score for Dayton, while only forward Karl Sellan would score for Arizona; giving the Sundogs one much needed point. Arizona goalie Levente Szuper faced 29 shots.

Arizona would go into overtime for the second straight game as they met the Quad City Mallards on Saturday night. For only the second time all season, Arizona would score first as forward Jason Williams scored his league-leading fifth powerplay goal in the first period. Sundogs' goalie Doug Groenestege would keep the Mallards scoreless until early in the third period when one would get by him on the powerplay. Quad City would score just over two minutes into the overtime to collect the extra point on the night. In total, Doug Groenestege would face 39 shots.

Arizona has taken a lot of damage on special teams; the majority coming when they are on the penalty kill. There has been some questionable reffing calls, but the Sundogs need to be better disciplined as a whole and stay out of the sin bin.

Sundogs' forward Adam Smyth and defenseman Clayton Barthel have both been place on 10-day IR.

Arizona will finish up the marathon road trip with two games against the Bloomington Prairie Thunder and one against the Fort Wayne Komets.