Share All sharing options for: Dog Caller - November 10, 2010 - The Sundogs Hit The Road; The Road Hits Back 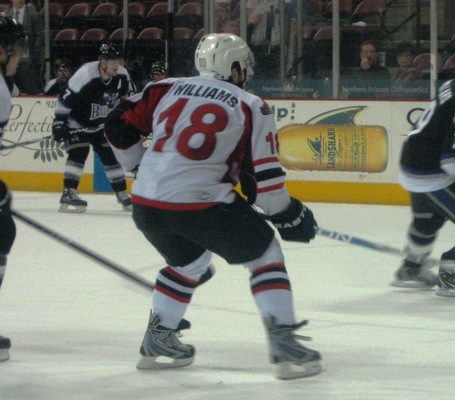 Having lost three straight games at home, the Sundogs hoped that the road would bring a turn in their fortune. However, it was different venues, same results.

Arizona began its season-long eight game road trip with a Friday night game against the Wichita Thunder. Wichita netted the only goal of the first period, but the Sundogs' Jason Williams continued his point streak by scoring on the powerplay in the second period. The goal was Williams' eighth point and fifth goal of the season, leading all rookies in the CHL. The Thunder exploded in the third period, scoring three more times while Arizona only found the back of the net once more. Each team had seven penalties in the 4-2 Arizona loss and Sundogs' goalie Doug Groenestege faced 37 shots.

The Sundogs picked up and traveled to North Richland Hills, Texas to face the Texas Brahmas on Saturday night. This would be the third time the teams had met in the last four games Arizona played and the final meeting in the regular season. Newly signed goalie Levente Szuper made his first start for Arizona. Szuper was a former fourth round draft pick of the Calgary Flames in the 2000 NHL Entry Draft. The native of Budapest, Hungary became the first Hungarian player to appear in the NHL when he was called up during the 2002-2003 season; though he never saw any playing time.

The night was one Arizona and its fans would like to forget as Texas would take the game 4-0. Once more, the Sundogs allowed 37 shots to make it through to their goalie. The lack of defensive cohesion has been a major factor in all of the Sundogs' losses this year. The game was yet another penalty filled affair between the teams as there was a total of 178 minutes on 38 infractions. A second period fight, part of which took place on the Brahmas' bench, has resulted in a two game suspension for Arizona defenseman Clayton Barthel and one game suspensions for defeseman and captan Tyler Butler and forward Adam Smyth. Smyth has a league-leading 95 PIM this season; 31 minutes more than second-place.

Sundogs forwards Joey Sides and Marc-Andre LaBelle have been activated off 10-day IR. Goalie Bobby Jarosz, forward Joel Irving, and defenseman Clayton Barthel were all placed on 10-day IR. Arizona signed forward Marcus Pryde. Pryde participated in Sundogs' training camp but was left off the roster to start the season. This situation will be familiar to Sundogs fans as that was how forward Joey Sides ended up on the roster last year and he was one of the bright spots last season, making the most of the opportunity he was given.

Arizona next faces three of the former IHL teams that joined the CHL this season; the Evansville Icemen, the Dayton Gems, and the Quad City Mallards; in three games in three straight nights.