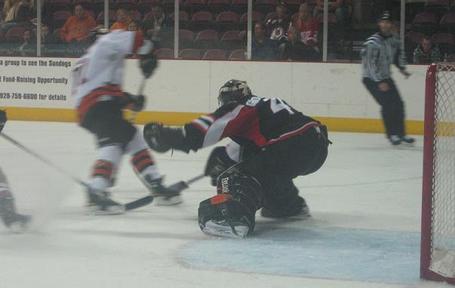 Four games into the season, the Sundogs have an earned a .500 record and have shown fans the type of play that gives them hope for the season to come.

The Sundogs opened the season on the road with back-to-back games against the depleted Colorado Eagles who could only start 15 total players the first night due to suspensions resulting from brawls in their final preseason game. Arizona got the first two goals of the game in the opening 11 minutes of the first period and continued a high level of play for the entire 60 minutes to come away with a 5-3 victory. Newcomers to the team were in the spotlight as forward Jason Williams had a total of four points in the game with three assists as well as the final insurance goal, and goalie Bobby Jarosz stopped 28 of the 31 shots he faced.

The second game of the season went to the Eagles as Arizona came out on the losing end of the 5-3 score this time. Colorado scored once in the opening frame and then three more times in the second before Arizona netted its first goal 12 minutes in. The Sundog's defense, which had seemed so strong the night before, was porous and allowed 35 shots to get through to goalie Bobby Jarosz. Once again Jason Williams appeared on the score sheet, racking up the team's first powerplay goal of the season.

The Sundogs came home for games three and four, back-to-back contests against the Fort Wayne Komets, formerly of the IHL and nine time league champions. Fort Wayne netted the first goal of the game in the opening frame, Arizona got one in the second, and a scoreless third sent the game to overtime. An elbowing penalty by the Komet's O'Connor one minute into OT gave Arizona the man-advantage and allowed forward Mark Kolanos to score his second goal of the night. Goalie Doug Groenestege stopped 28 of the Komets' shots and looked solid in goal. New captain Tyler Butler gave the fans reason to cheer when he racked up an instigator, fighting major, and misconduct penalties while defending his goalie from a Fort Wayne player who knocked Groenestege to the ice. 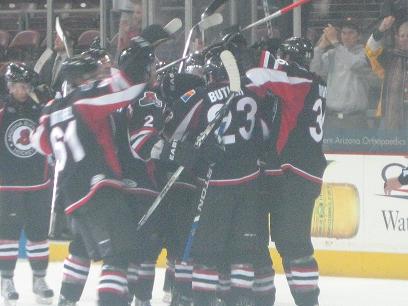 Saturday night's game once again had the Sundogs on the losing end of a back-to-back series as the team lost to the Komets 2-1. Fort Wayne netted a goal in the first and second periods before Arizona captain Tyler Butler scored the Sundogs' lone goal unassisted on the powerplay. Groenestege turned away 29 Fort Wayne shots in the penalty filled matchup. After four games Arizona is tied for the most minor penalties in the league with 38 total.

On October 25th, the Sundogs placed forward Torren Delforte on 10-day IR retroactive to the 23rd and re-acquired former Sundog Karl Sellan from the Missouri Mavericks.

The Sundogs' next two games are this weekend, October 29th and 30th, against the Texas Brahmas. After four games this season, the Brahmas have a 1-2-1 record. On October 29th, Arizona will retire former captain and now assistant coach Chris Bartolone's jersey.

Today the team will be at Freedom Station in the Entertainment District from 6pm to 8pm for a meet and greet. All players, coaching staff, and Burnie the mascot will be on hand to sign autographs, take pictures, and compete with fans on many of the attractions such as bumper cars and mini-golf. Admission is free.