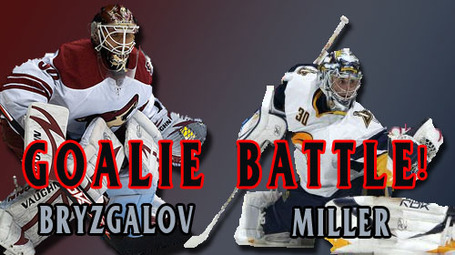 It's gameday here in the desert again as our extended homestand continues with the Buffalo Sabres. Neither team was expected to be where they currently are in the standings at the beginning of the year, but both have ridden excellent goaltending to their places in the standings. Ryan Miller has a slight edge over Ilya Bryzgalov in the major goaltending categories, but it isn't by much. Here's the breakdown:

Miller has the edge just about everywhere, but the Coyotes have been finding their offense lately, and not against slouches either. put up 4 on Martin Brodeur and the East leading Devils and then 6 on Niklas Backstrom who has been a perennial thorn in the Coyotes' side until this season. That doesn't necessarily mean that we can work the same magic on Ryan Miller and the defensive minded Sabres though, especially if we let our guard down when we get the lead like we have been.

I'd expect to see the same lines rolling for Dave Tippett and the Coyotes tonight as The Winnik - FIddler - Doan creation was running people over and commending the puck. The Czech line won't get touched, but I wouldn't be surprised to see Paul Bissonette get back into the lineup for some extra cruch against a physical team.

One unfortunate thing is that Patrick Kaleta, who ran over Radim Vrbata in the previous meeting between the two teams is out so there will be no comeuppance for him tonight.

Radim Vrbata got the late goal against the Wild that sealed the deal on Saturday and is riding a 4 game points streak (2g, 2a)

He's the dangerous one on the Sabres at the moment. Riding an 11 game point steak with 5-11-16 over those 11 games. He finds a way to contribute every night.