Five (for Howling) Questions with Earl Sleek about the Anaheim Ducks

Share All sharing options for: Five (for Howling) Questions with Earl Sleek about the Anaheim Ducks

In our continuing series of interrogating SBN bloggers using "enhanced techniques" asking SBN hockey blogger questions about their teams we emailed Earl Sleek of Battle of California who was able to tear himself away from MS Paint long enough to answer our 5 questions about the Mighty Ducks of Anaheim.

1)      With how Jonas Hiller performed last year and with a couple young guys (including Justin Pogge) waiting in the AHL, how long do you think it'll take for someone to come calling for J.S. Giguere and his 6 million dollar salary?

To be honest, I don't think there will be any calls to GM Bob Murray about Giguere until the trade deadline at the earliest, though Murray may be ringing potential trade partners before that.  Giguere isn't only hampered by a $6M cap hit this year and next, but he also has a no-movement clause, so it's probably a very short list of teams that could both afford and attract him.

Of course, a lot could happen between now and the trade deadline, especially with such whopping turnover on Anaheim's blueline.  One thing I know about Jonas Hiller -- that guy's a great puckstopper but leaves tons of rebounds out front; Hiller will probably miss Pronger's box-out defense more than anybody.  So I think it's good for Anaheim to test both goalies behind a Prongerless defense, and I don't think it's impossible that Giguere re-seizes the #1 job in Anaheim.  It's definitely one of my main questions going into this season.

Besides, why aggressively trade for goaltending talent from Anaheim?  Better to wait and nab a quality goalie for free through waivers, right Coyotes?

[Editor's Note: Thanks for Bryz Earl] 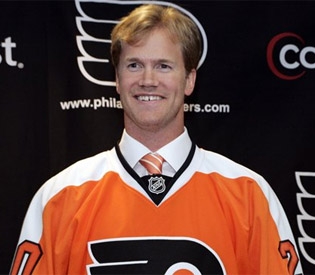 2)      Anaheim had a fairly busy offseason trading Chris "Elbows" Pronger to the Fliers Flyers and picking up the aforementioned Pogge among others. How have the moves changed the makeup and style of this year's squad?

Well, on the one hand, I have to think next year's Ducks will be wildly different -- don't forget that we've parted ways with reliable minute-eater Francois Beauchemin as well.  That leaves Scott Niedermayer to lead a bunch of new arrivals on the back-end.  Also, let's not forget how last year's Ducks essentially rode the Getzlaf line to success; GM Murray has bolstered that offense for sure.  With a top-six of talent that includes Ryan Getzlaf, Corey Perry, Bobby Ryan, Saku Koivu, Teemu Selanne, and Joffrey Lupul, I have to think that next year's Ducks will be more offensive-minded.  There should be at least two scoring lines and two strong power play units.

Then again, it's still the same head coach Randy Carlyle behind the bench, and I suspect he embraces change the same way I embrace punches to the face.  As much as the personnel has changed in Anaheim, I suspect that once all the line-sorting has worked its way out, the Anaheim Ducks will emerge with a similar punch-first, ask-questions-later mentality -- they'll try to control the bluelines and the front of the net.

3)      Anaheim is interesting in that you have a chunk of guys skirting retirement and another chunk of young up and comers. Who are you looking to have a breakout year and who might have just been better off hanging them up?

Well, I'm not sure if it's that interesting -- Niedermayer and Selanne go through retirement dances every summer now, and it's become sort of a tired annual tradition by now.  Still, I can't complain, since every year they make the correct decision -- to come back and play, and to refuse to shop their talent around to other teams.  It's Ducks-only, and I definitely love that.  Aside from those two, you can toss Koivu and Marchant in as the team's elder veterans, and the key that makes them work -- they're all talented and incredibly popular -- I don't think any of them should be hanging them up.

The up-and-comers are at various tiers of accomplishment -- Getzlaf, Perry, Lupul, Whitney, and Hiller have more or less established themselves in the league, with still some possibility of improvement.  Below that, Sbisa and Ryan have played less than a season apiece, and definitely look to improve.  I'd say that Bobby Ryan has to be the breakout pick -- he had a phenomenal Calder-runner-up season where he went through a real-life "Be a Pro Mode" -- started on the Iowa Chops, moved up to the Ducks' fourth line, then gradually ascended to top-line duty by the time playoffs rolled around.  Give that kid a full season and some regular linemates, and I'm not sure how high his ceiling really is.  Plus, it's Ryan's contract year -- look out, opposing goalies.

4)      The Pacific looks to be a crap shoot from top to bottom this season. With The Kings and Coyotes having young teams looking to climb up, the Sharks will be trying to continue their winning ways, but have a lot of roster work to do and Dallas coming off a down year. Where do you think Anaheim will end up in this mess of a division?

It's really tough to say, and a lot depends on how quickly the Ducks can figure out their optimal lineup and how seriously they decide to play.  Don't forget that last year the Ducks essentially weren't a playoff team, except for the late-season-moment when they decided to "turn it on" and finish 10-2-1 or something and barely nab 8th seed.

I have to hope that last year did teach the Ducks' young players some lessons about why early season matters and why it's essentially impossible to win a cup from an 8th seed.  That said, the Sharks have plenty of reason to be upset about last year's finish, and all the rest of the Pacific will be aiming for a return to the postseason as well -- the division really could end up in a lot of different finish orders.

I suspect the Sharks will take the division again -- they've slipped some, but probably not enough -- but beyond that, I'm just hopeful the Ducks hang in the top eight.  I suspect they have enough talent and roster options to do so, but as we saw last year, they can't coast on that -- perhaps Koivu's legendary leadership could prove helpful there. 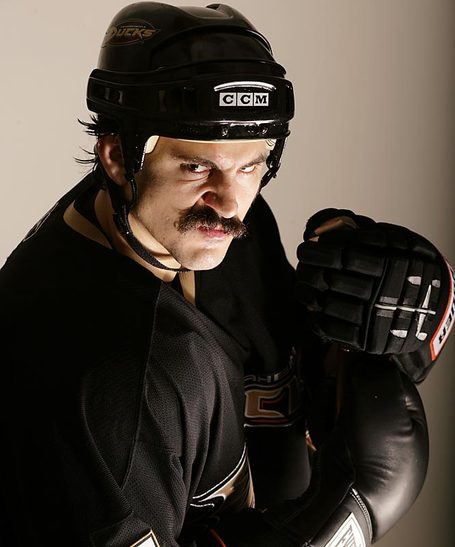 5)      What impact will George Parros' moustache have on the team this year?

And don't laugh that Hockey Skill is ranked # 5 -- before last season, it wouldn't have been on the list at all.  But all told, it's a pretty good package -- the Moustache is incredibly popular in blood-loving Anaheim, and the Ducks have probably sold several hundred ParrosStaches as a result.  He gets butts out of the seats, contributes off-ice wherever he can, and has become a poster-favorite in the city -- not bad at all for a one-dimensional puncher.

Parros isn't my favorite player, though in general I am still a dinosaur fan who loves fights, but if I was Anaheim's GM I'd have signed him in a heartbeat, too.  There's so much you're getting in the Parros package aside from an enforcer; long live the Mighty Moustache!