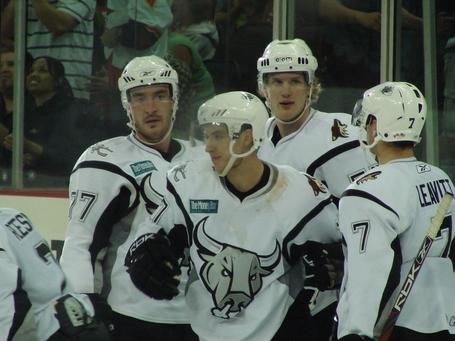 It occurred to me late last season that when it came to the Coyotes minor league system that I knew absolutely nothing about them. Guys would be called up and I'd have no idea what the heck was going on with them because I was busy in my little Coyotes world. I'm sure I'm not the only one that doesn't know what's going on on the farm. I do however, know some people that do and they've agreed to join the Five for Howling team! SARampagefan04, aka Jessica, will obviously be covering the San Antonio Rampage and updating us on the goings on down there. She also takes a ton of pictures of the Rampage (see above) so we're set on that front for those Jonas Ahnelov and Francis Lessard fans in the valley. Sundoggirl, aka Valerie, will be covering the Arizona Sundogs for us. While I know the Sundogs are no longer our CHL affiliate, I think it's important for Phoenix fans to at least know the goings on in Arizona hockey. So be sure to welcome the both of them to the pack and look forward to reading their stuff! After the jump read a little bit about each of them and their fandom for their respective teams...

I have been a Rampage season ticket holder going on 7 years( since the beginning of the team). My mother and I became fans of the Rampage because it was either support them or not go to any games. I've been a fan of hockey going on almost 10 years now. The reason why I got into hockey was because of the game, it is one of the best sports there is. My favorite former Rampage players are; Filip Novak, Ryan Jardine, Grant McNeill, Joe Callahan, Randall Gelech, Travis Scott, Curtis Fraser, Bryan Helmer, and Pete Vandermeer to name a few. Present players are; David Spina, Dylan Reese, Jeff May, Chad Kolarik, and Kevin Porter, also some others. I believe this season will be a good one, with all the new guys coming in it will be interesting. Especially those players coming in from the Ducks organization. Here is to wishing both the Coyotes and Rampage to one of their best seasons to date. GO COYOTES AND RAMPAGE!!

I grew up in southern California and moved to northern Arizona nearly five years ago. I grew up a sports fan, but didn't get into hockey until my mid-twenties. It was a game that I always thought I would like, but never understood. I met a friend who grew up a hockey fan and he explained the game to me. Once I understood it, I was hooked. I found myself unable to cheer for the then Disney run Mighty Ducks, so I adopted the L.A. Kings as my NHL team and still support them to this day.

Shortly after moving to Arizona I read some of the best news, the town was building an arena about a mile from my home and the main tenant was going to be a minor league hockey team. I watched the building go up eagerly, almost as eagerly as I followed all the news of the team's formation. From ownership being decided to the naming of the mascot, I followed it all and participated in every fan vote and poll. Opening night at Tim's Toyota Center was amazing, and even if the Sundogs didn't win that night, I knew I was a lifelong fan and have never looked back. I've had seats on the glass for three seasons now and have only ever missed one game and that was due to illness. The Sundogs are an amazing organization and all you ever have to do is meet any of the players to know that. They are the most approachable athletes I've ever known and the community has embraced them and the team wholeheartedly.

Just as with any sports team, there are ups and downs but my devotion to the team has never wavered. I'll never forget the night of March 19, 2008 when the Sundogs trailed Rocky Mountain 5-0 at the end of two periods and were down 6-3 with 1:28 left on the clock. The Sundogs tied it up, sent it to overtime, and scored the winning goal. My voice was so hoarse from screaming that night that I could barely talk for days afterward. The best two moments yet though were watching the Sundogs win the Ray Miron Cup in a sweep over the Colorado Eagles in Colorado for the 2007-2008 season and then being part of the crowd to welcome the team home as they brought a championship to northern Arizona. I look forward to being there for the only thing that will ever top that, the Sundogs winning the championship at home.