Share All sharing options for: Ice Edge Group Gets Closer to Glendale Agreement 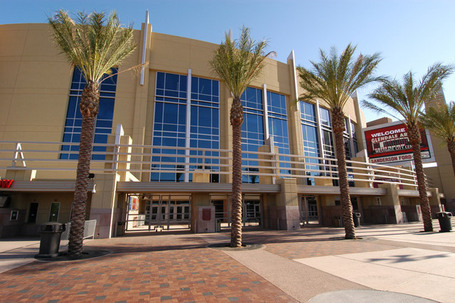 Remember back a short few weeks ago when Jerry Reinsdorf was in the driver's seat in acquiring the Coyotes and Ice Edge Group was that crazy hodge-podge outfit that wanted to play playoff games in Saskatoon? Well a lot has changed since then and JR is out, the NHL filed their own bid and Balsillie has gone all deadline again. Yet while no one was paying attention and focusing on NHL v. Balsillie a funny thing happened. Ice Edge actually became a serious contender in this thing. In fact they've apparently managed to get close to the one thing Jerry Moyes, and Jerry Reinsdorf failed to. A renegotiated lease with the City of Glendale. From today's filings:

5. After several weeks of prolonged negotiations, Ice Edge has entered into and executed a Memorandum of Understanding with Glendale (the "Glendale MOU"). Pursuant to the terms of the Glendale MOU, Ice Edge and Glendale have agreed to negotiate definitive documentation regarding the transactions and agreements contemplated therein, including an amended Arena Management, Use and Lease Agreement (the "AMULA") for the use of the Arena. In fact, certain key principals of Ice Edge have been in Phoenix the better part of this week
attempting to finalize negotiations of the amended AMULA with Glendale representatives. Upon execution of the amended AMULA, and the other agreements contemplated in the Glendale MOU, Ice Edge believes it can remove certain contingencies in connection with the Auction contained in the Ice Edge Bid that have been the subject of certain of the Objections.
-From OMNIBUS RESPONSE TO OBJECTIONS OF THE DEBTORS, THE OFFICIAL JOINT COMMITTEE OF UNSECURED CREDITORS, AND JERRY AND VICKIE MOYES TO ICE EDGE OFFER TO PURCHASE THE ASSETS OF COYOTES HOCKEY AND ARENA MANAGEMENT pages 4 and 5

Add to that, that there's now a hearing scheduled with the City of Glendale City Counsel this coming Tuesday and things get interesting in a hurry.

There's been some reports of the NHLPA backing the other two offers (NHL and PSE) in court filings, but as of yet i've been unable to find anything in the filings themselves from the NHLPA or even as exhibits to other filings. I'm sure we'll hear more about that over the coming days.

The only other major hurdle to the Ice Edge group is getting league approval. They're miles ahead of PSE in that they haven't been flat out rejected, but I would imagine that if they're able to work out a deal with the City of Glendale that makes everyone happy, they become the front-runner in a hurry. The Judge hasn't seemed to want to rock too many boats in this case so far,  and if there's a way for him to not go against the league that doesn't hurt the creditors (Moyes excluded) everything so far points to him wanting to take it.

At this point I'm willing to eat five games a year for a couple seasons if it means making hockey more viable in the long term here in Phoenix. It's not ideal, but I'll take what I can get.