Coyotes Claim Paul Bissonette Off Waivers From the Penguins

Share All sharing options for: Coyotes Claim Paul Bissonette Off Waivers From the Penguins 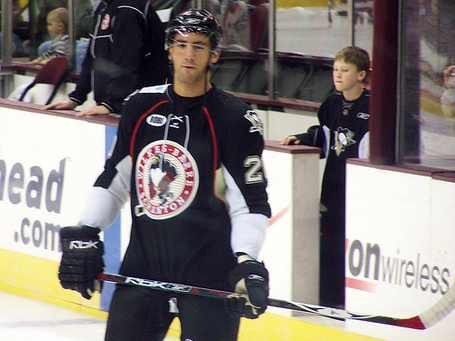 Bissonnette, 24, appeared in 15 games with the Penguins last season, recording one assist and 15 penalty minutes (PIM). He also played in 57 games for Wilkes-Barre, Pittsburgh's American Hockey League (AHL) affiliate, where he registered 9-7-16 and a team-leading 176 PIM.

The 6-foot-3, 220-pound Bissonnette has appeared in 161 career AHL games with Wilkes-Barre, collecting 13-17-30 and 387 PIM. He has also played in 101 career ECHL games with Wheeling and has recorded 16-53-69 and 162 PIM. Prior to his professional career, Bissonnette, a native of Welland, Ontario, played four seasons in the Ontario Hockey League (OHL) with Saginaw and Owen Sound.

Bissonnette was originally selected by Pittsburgh in the fourth round (121st overall) of the 2003 NHL Entry Draft.