The struggles of this NHL franchise in the desert have been well documented all summer long. We're still waiting for a decision as to the long term future of the team, but they're here for this season and all the speculation in the world won't change a preview of the team will it? (No, it won't) We're just one short week away from the season opener so now it's down to the nuts and bolts of what the on ice product is going to look like.

The upside of this team is that with the exception of Olli Jokinen and some fourth line forwards and 5/6 pairing Dmen, this is the same team that went into the All-Star break in 5th place in the Western Conference. The team promptly fell apart after the break with all the rumors about the financial troubles and the general lack of experience. With some more mid-aged experience to bridge the gap between the veteran and the kids, there really is a lot of potential for a breakout year. 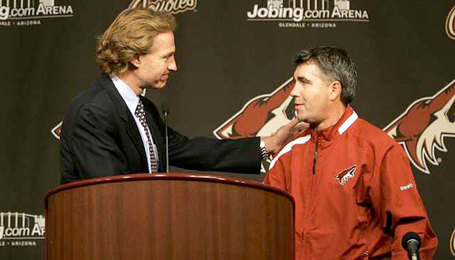 Amid all the uncertainty this summer, just on Thursday the Coyotes signed a new head coach in the form of Dave Tippett following Wayne Gretzky's resignation. Tippett brings with him a proven system that has proven results in Dallas. While he's a little late to the party in terms of training camp, there's a lot of talent for him to work with here in Phoenix. This biggest question mark with this team is how they'll react to all the media that will be focused on them, especially at the beginning of the season. If they're able to turn it into an us against the world type of situation then we could have a strong start. If, on the other hand, they react like they did down the stretch last season and turn all that inward and implode it'll be a disaster. There's not a whole lot of room for error this year as the team needs to show outside observers and potential fans in the valley that the team is the real deal.

Without a whole lot of budget room to work with this summer, GM Don Maloney put together a pretty decent lineup. He did especially well filling in the defensive holes that have plagued the team the last few years. The spots that had been held by any combination of Ken Klee, Dimitri Kalinin and David Hale have now been filled with Adrian Aucoin and Jim Vandermeer. Aucoin has some offensive ability but is a good puckmover, while Vandermeer is all about defense. Along with the existing defense of Zbynek Michalek, Kurt Sauer, Ed Jovanovski and Keith Yandle this year's blueline pairs look solid.

At Forward, some of the youth has been sent down to San Antonio already to get a little more experience. Viktor Tikhonov and Kyle Turris are the biggest names to be sent to the farm. Turris needs to just grow since he's a small little twig man and Tikhonov just needs more experience. He had a solid time on the PK with the big club last year, but he had a weak camp and needs more time to develop. I expect to see both at times this year though. In Camp Brett MacLean and Kevin Porter have both played well and will Challenge for a roster spot. MacLean tore up the OHL in the 06-07 and 07-08 seasons (going 47-53-100 and 61-58-119 respectively) before moving to the AHL last year. In 74 games on a pretty bad San Antonio team he was able to go 21-19-40. If he can bring some scoring touch to the team that would be great. Most of the roster though is already set. Shane Doan will once again captain the team and be his usual awesome self.Peter Mueller and Martin Hanzal are now entering their third seasons. Both will be looking for new contracts this summer and both need to pick up their games to get good ones. Mueller hit the Sophomore slump HARD and needs to find his scoring touch again. Hanzal was a solid Defensive forward, and had flashes of offense here and there last season. He needs to simply shoot the puck though, he has a cannon of a shot, but he tends to pass a little too much when he has chances. Other notables are Mikkel Boedker who had a pretty good rookie year, Radim Vrbata, who returns to the club and Scottie Upshall who needs to deliver on the potential everyone says he has.

Ilya Bryzgalov will continue to hold down the starting spot this season. Jason LaBarbera was brought in to back him up, but i'm not seeing anything in LaBarbera that makes me think he's going to give Bryz the competition everyone thinks he needs. Bryz has been on the decline, but with this year's defensive unit he needs to show he can get the job done. 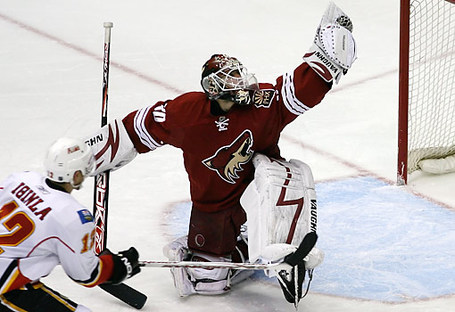 Who's Up?: (Players up from AHL) Brett MacLean, Kevin Porter and David Schlemko

Who's Down?: (Demotions) Kyle Turris and Viktor Tikhonov 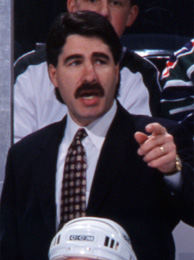 Season Prediction: The Coyotes make it into the playoffs. Why? Because they have to. It's the only end that makes sense for this crappy story so far. I'm not saying we win the division or anything crazy like that, but bringing in Tippett and an honest to god system instead of an ever changing one can only do good things for this team. Like I said earlier, this team is packed with potential. We saw small parts of that potential realized in the first part of last season. The key is to keep it going through April and hopefully into May. I think Tippett is able to get them to do just that. He brings the mustache back and leads the Coyotes to a 7th place finish in the West and at least make the playoffs interesting. Feel good story of the year and everything. David Shoalts and Canadian media outlets complain about how our playoff spot wasn't given to Edmonton automatically.