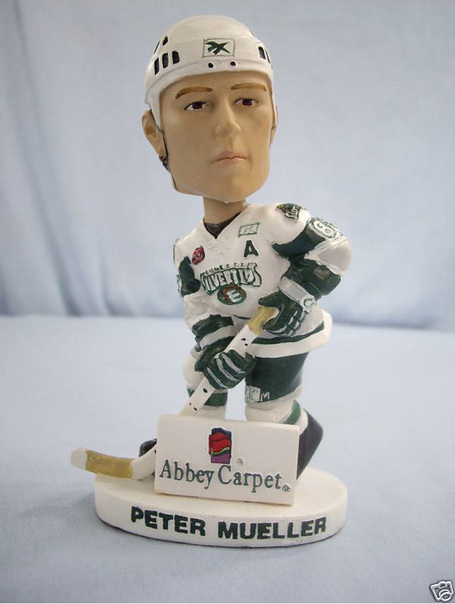 The Coyotes travel to the Pacific Northwest today to face the Tampa Bay Lightning. Why exactly we're traveling there I don't know but I would be remiss if during this game preview I didn't mention at least a half dozen times that Peter Mueller played his Junior hockey with the Everett Silvertips(1), because he did. Check out the bobblehead above for evidence that he indeed did play for the WHL's Everett Silvertips (2). Though it looks as though now Mueller, who played in Everett (3), may be out of the game with a minor groin strain. More on the game and Peter Muller's Everett days after the jump (4).

There are some other interesting storylines for tonight's match up other than Peter Muller returning to Everett. (5) Shaun Heshka also played for them during his stint in the WHL, so Mueller isn't the only one (6). The Battle of the Brett M(a)cLeans should be interesting in a we're going to confuse everyone listening on the radio kind of way. They're McLean is older and breaking down, our MacLean is the young hotness. Got it? Good. Hopefully we also get to see so me time from Montoya who hasn't gotten much ice time in the preseason.With Sean Burke in as Goalie coach hopefully that will make some difference. Still looks like Mueller won't be playing in Everett (7). That's about all i've got for this preseason tilt other than the line ups for tonight's game.

Coyote's Lineup for the game as of this morning: