Share All sharing options for: Grant Fuhr Out as Coyotes Goalie Coach - Sean Burke to Step In 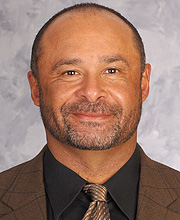 Andy Strickland is reporting that the Coyotes have relieved Grant Fuhr of his job as Goaltending coach, replacing him with Sean Burke. Burke, who retired from the NHL in 2007, has been on the Coyotes staff for a year and a half as Director of Prospect  Development.

Fuhr came in to the Coyotes organization just as Wayne Gretzky was preparing to become head coach. While the Coyotes have added Ilya Bryzgalov and Al Montoya to the roster in that time, among others, the goaltending for the team has been suspect at best and hasn't shown much improvement. Part of the probelm, at least in my opinion, is that Fuhr was a totally different type of goalie from what is currently in our system. We seem to be keen on drafting or getting taller goalies that require a different skill set than what Fuhr was used to. Bringing in Burke, on the other hand, plays to the same physical build at least if not the athletic ability.

Strickland also reports that Fuhr has been reassigned within the team to work with the prospects. Possibly just switching places with Burke for the time being.