Share All sharing options for: Five (for Howling) Questions with Litter Box Cats about the Florida Panthers

Whale4ever writes about all things Florida Panthers for Litter Box Cats here on SBNation. Be sure to check out his "informative" blog that has lots and lots of pretty pictures for all.

1)      The Panthers just missed out on the playoffs last year. What has the team done to hopefully put them over the top this coming season?

Lobbying the league to change the playoff tiebreaker format came to zippo, unfortunately. It appears they'll have to earn a spot in 2010 by gaining more points than the opposition. Strange but true. However, just to be safe, Assistant GM (to noone) Randy Sexton released some parts deemed less than the whole for various reasons (Peltonen, Zednik, Stewart, Anderson, a third of the forever "prospects" in Rochester). Replacing these were Jordan Leopold, Steve Reinprecht, Ville Koistinen, Jeff Taffe, a number of veterans for the Amerks, new members of the training and equipment staffs, a soon-to-be-named goaltending coach, and a Big Fat Contract for one David Booth. At least they weren't staring at replacing a Bouwmeester type. Oh, yeah. That. In all seriousness, the biggest "addition" to the club is not really an addition at all: Coach Peter DeBoer's "systems" are in place and were adhered to (fairly successfully) through the second half of last year. Once the team bought in to DeBoer's strategy, they got much better, and quickly. A whole season of that now awaits.

2)      What players on the Panthers are you looking for breakout seasons from?

I've said it elsewhere, and I'll stick by it here: Nathan Horton. Too much raw talent to not improve. He's got a wrist shot second to a select few in the league, and the size to bull his way into - and more importantly, out of - any situation. What's the key? Shoot and shoot often. If that doesn't work? Shoot more.

3)      Tomas Vokun did pretty well for you guys last season and now you've brought in Scott Clemmenson to back him up, who did a pretty good job in place of Brodeur in New Jersey last season. Are you feeling pretty good about your goaltending?

Yes, and even the word "comfortable" could be employed here. Craig Anderson (since departed for a starter's position with Colorado) was a dream come true in 2008-09, and often carried the club for long stretches when "T-Vo" didn't appear to have the mental stamina - for whatever reason - to close the deal. Evidently, he's worked tremendously hard this summer to get That Look back in his eye. Clemmensen was a brilliant Plan B (or was he Plan A all along?) when Andy bailed for his greener pastures. As an observer, I'm not sold that Vokoun played better hockey when pushed by Anderson, so it'll be fascinating to watch this play out. The absolute last thing this organization needs right now is a goalie controversy. 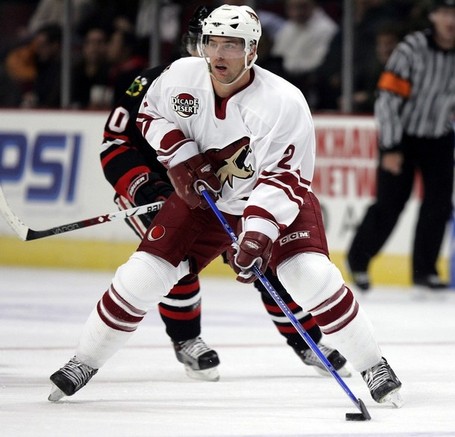 Oh, you're talking to a fanbase that has adopted him with open arms. He gets people on their feet, his hustle is as good as any member of the team and you simply don't know what he'll do next. He prowls low, taking on the air of a shark seeking prey; your eyes seem to instinctively dart across the ice scanning for his next victim. I was in the BankAtlantic Center for that April 5th game against visiting Pittsburgh when Ballard rearranged a very human Evgeni Malkin into a very human cartwheel; I've never heard the building explode with such a raucus Wall of Sound the way it reacted to that hit. He didn't lose any points with the fans that night. 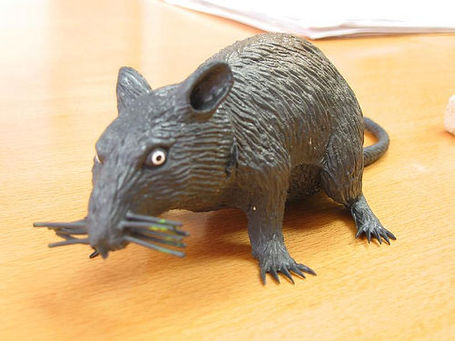 5)      For the uninformed among the fans, what's the deal with the rats? How did they become associated with Florida Panthers hockey?

The good stories never die: During the 1995-96 home opener at Miami Arena against Calgary, a (presumably stray) rat appeared in the Panthers' dressing room before the game commenced. Aspiring exterminator/Florida forward Scott Mellanby did what any self-respecting hockey player would do: a quick wrister with his stick sent the rodent hard against the far wall, ending its unauthorized tour of the facility. That evening he scored two goals in the eventual 4-3 victory over the Flames. Following the game, Panthers' goaltender John Vanbiesbrouck described Mellanby's action as a "Rat Trick".

The story soon made the media rounds; once fans learned of the story, the maniacal rubber-rat tossing began in earnest. First a few, then dozens, ultimately leading to thousands being thrown after the home team scored goals. Every time. By the end of the playoffs that season - Florida's first to the postseason, and last to the Stanley Cup final - the raining rats had become such a time-wasting endeavor for ice crews (and a safety issue as well) that the league banned the act altogether.

Fans have long memories, however: rubber rats were seen hitting the ice in a few road cities when the Panthers put a modest bit of winning together last year. Warms the heart.