Coyotes Coloring Pages - B is for Bryz

Share All sharing options for: Coyotes Coloring Pages - B is for Bryz

B is for Bryz. Because unlike SOME of my fellow Coyotes fans I'm not in any way upset with our starting goalie. "He gives up soft goals!" they say. Or "He's angry at the team." Well he's had every right to be. Backstopping a team that gives the opponent 30+ shots every night and had him at 4th in the league with 1994 shots against  (In 65 games, 6 less than the guys in front of him) even with a stellar save % (he was at .906 on the year) that would be rough. Bryz wasn't the BEST goalie last year, but he was far from the worst. With a competent defense now looking to be starting in front of him this year should be even better. I'm actually looking forward to seeing if he can really be the man and be the #1 starter or if the poor defense was just providing an excuse. He better be the man. My pet cat is named Bryz. I'd hate to have to shun the cat too. 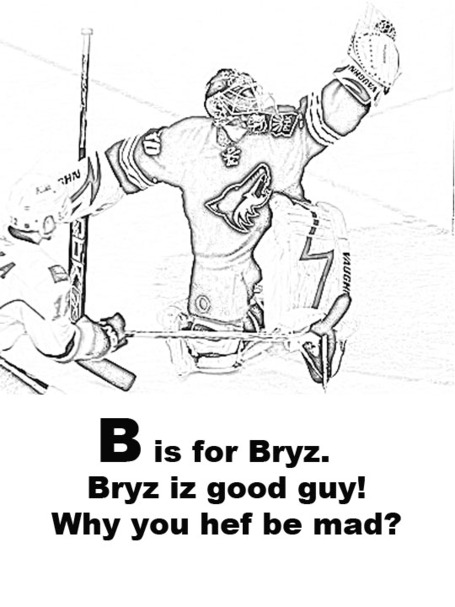