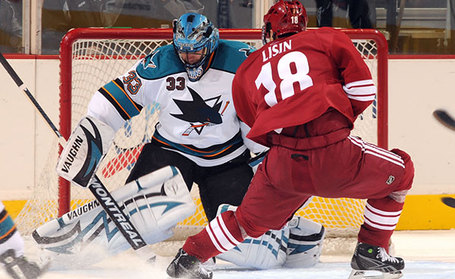 According to the Russian hockey website Allhockey.ru, Coyotes forward Enver Lisin has been offered a contract in the KHL by Atlant Mytischi. A rough translation of the article can be found here. Lisin is a restricted free agent come July 1st.

Lisin has been apart of the Coyotes organization since they drafted him in 2004 in the 2nd round, 50th overall. He has bounced between the Coyotes and their AHL affiliate, the San Antonio Rampage, since coming over during the 06-07 season before earning a solid spot this past season. Unfortunately, Lisin did not get as much playing time as I or other Coyote fans had hoped, despite being a difference maker on the ice with his speed and skill. He managed to finish with 13 goals and 8 assists for 21 points in 48 games this past season.

With the Coyotes in a financial bind, high end talent off the free agent market will almost certainly be impossible to get this offseason, forcing the Coyotes to go with inexpensive veterans and young players still looking to break out in the NHL. Lisin has the skills to not only play in the NHL but also be a good goal scorer. He is one of the fastest skaters in the league and can, at times, look like a Pavel Bure or Alexander Mogilny when the whole package comes together. Offense has been a problem for the Coyotes the past few seasons but someone like Enver Lisin will be able to spark the offense and create opportunities not only for himself but for his teammates.

His defensive play does need work but he has come a long way in that respect since making the trip across the Atlantic to join his NHL club. Don Maloney should make it a priority to try and retain the young Russian speedster. When he did play this season, Lisin was one of the few bright spots when the Coyotes were crashing and burning in the middle of the season. Consistent playing time and consistent line mates will give the young Coyote a chance to really make a difference. He already has a few times...just look at these goals.