A Step in the Right Direction

Share All sharing options for: A Step in the Right Direction 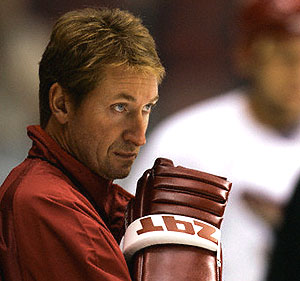 With the rejection of Jim Balsillie by the bankruptcy court the Phoenix Coyotes have a bit of a clearer picture of their future.

While the occurrences of the ice have been dominating the headlines, an important issue that needs to be looked at is how the Phoenix Coyotes can be better on the ice and start climbing their way out of the rebuilding phase and into the contender status. There is no step by step guide to building a Stanley Cup championship team but there is a key component that is needed for this happen.

The head coach and his staff are responsible for making their team ready to go every night. Whether it is going over strategies they use, those the opponent uses, or simply working on the fundamentals of the game, a head coach needs to be able to do these things well if a team is to succeed. The coach needs to have a system that his players believe in and one the team is willing to work in.

Wayne Gretzky has been coaching the Phoenix Coyotes for 4 seasons now. He has only finished with a .500 record or better just once with the team never finishing above 4th in the Pacific division in his tenure.

I understand that Wayne Gretzky is one of, if not the, best player to ever lace up a pair of skates. However, as sports history shows, success playing on the ice, court, or field does not necessarily translate into success as a head coach.

When the Great One first became head coach, I was skeptical about the whole idea but I gave Wayne a shot. I was hoping he would prove me wrong and really become a great head coach. However, unfortunately, the situation has not improved for Phoenix and it is because Gretzky is the head coach.

If this was a team of veteran NHL players who knew their way around the NHL I would not mind having Gretzky around. However, the Phoenix Coyotes are a team with 13 players on the active roster who are 25 years of age or younger. Many of them are still learning the rigors of the NHL and need a veteran coach who knows how to teach and motivate players. They need a coach who has a system that they know forwards and backwards. When the system breaks down, they need to know what went wrong and how the system can be improved to maximize a team's chances of winning.

Wayne Gretzky has not shown anything that makes me believe that he knows what he is doing as a head coach. He has benched and scratched players who are playing well, has not improved any of the special teams over his few seasons, and has a staff with him that is not fit for the NHL. I loved Ulf Samuelsson as a player but I highly doubt he knows what he is doing with the power play which finished in 28th this past season with a success rate of just 14.5%.

The penalty kill is another story that is dark and dismal for the Phoenix Coyotes. Also finishing in 28th this past season, the PK has been absolutely dismal and led to many losses late in games when the Coyotes would take late penalties with a small lead. The Coyotes have responsible defensive players such as Martin Hanzal, Daniel Winnik, and Steven Reinprecht, but they need a system that works to combat opposing power plays.

There are some candidates out in the hockey world, such as Peter Laviolette and Mike Sullivan, but this team needs a group of leaders behind the bench who can teach and mold the young players of the organization into successful and responsible NHL players. The Coyotes do need many aspects if they want to win the Stanley Cup, but bringing in a coach who knows how to run a team properly will go a long way in bringing success now and in the future.