Why NOBODY should be Rooting for Balsillie and Moyes

Share All sharing options for: Why NOBODY should be Rooting for Balsillie and Moyes

Ever since Jim Balsillie made his play to get the Coyotes earlier in the week, the NHL community has been going nuts over it. He started the Make It Seven Campaign. A campaign designed to rev up the nationalistic side of the equation in a hurry. He's been hailed by many fans that want more hockey teams in the Great White North at a savior of sorts. However, should he succeed, it would be disastrous for not only hockey, but it would be a blow to all of sports in the states.

If there's one thing that's important in all of this it's that the Courts LOVE precedent. If the court goes with every anti-trust argument against leagues that has been decided over the past few years they Balsillie's argument should be tossed out on it's face. Let's say that Balsillie wins this case though. He wins every part of it including getting into ownership against the wishes of the NHL. If that happens the future of EVERY hockey team is now in doubt. Why? Because it sets precedent for any other owner that gets into financial trouble. Your owner overleverages his team and can't get out of debt? Great. He can sell to someone who wants to move the team to Chicoutimi and not have a problem at all. In the short term some Canadian fans would probably be excited about that. However what makes teams here have issues could just as easily happen in Canada.

When the Nordiques and Jets were moved, a large part of the reason was that the exchange rate between the US and Canada was absolutely brutal. You could flip around the profit sharing equations if that was still the case today. If the CAD took a dive again after Balsillie won, you'd not only see those teams suffering, but even more teams moving. Could teams like Edmonton and Ottawa survive if that happened? Plenty thought some of them could have just a few years ago. It wouldn't just be the Canadian teams hurt though. Any time an owner just didn't want to put any more money into a team, they could just close up shop and sell to whoever wanted to play with it next. Any team outside of Toronto, Montreal and New York would be in jeopardy. The movements of teams in and out of markets would start to look like the route map of a major airline.

Another thing that a Balsillie win produces is a fear for every city or area looking to build an Arena. You can forget about government funding for any type of sports arena. If Moyes can simply bankrupt his way out of the lease agreement with little or nothing going to pay the city back for footing the bill. This would screw up the entire business model for not just the NHL, but MLB, NFL and especially the NBA which lives on pushing every city for a new arena (Hello Seattle). 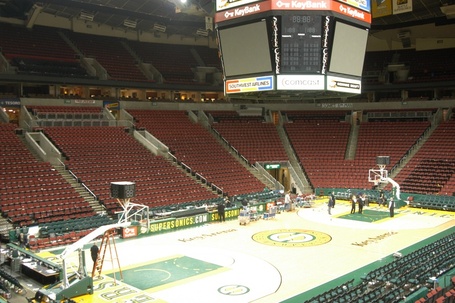 So before everyone gets all caught up in they fervor of wanting another Canadian team, you should probably ask yourself if this is how you want it to happen. While you may get the short term reward of getting a team or two, in the long term you could get royally screwed.