A Hockey Game Breaks Out and I Meet Marty Hanzal: Coyotes Lose 5-1 and I Don't Care

Share All sharing options for: A Hockey Game Breaks Out and I Meet Marty Hanzal: Coyotes Lose 5-1 and I Don't Care 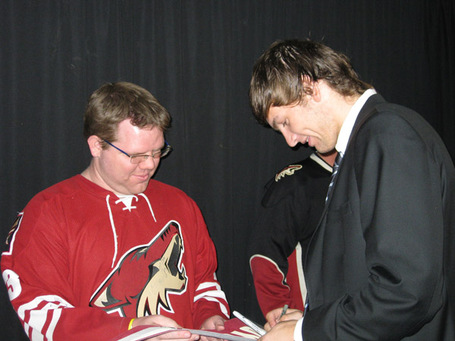 Martin Hanzal signs my stuff following the game while I attempt to grow my hair longer to look like his. (Photo: Z4Dfense w/ my camera/FfH photo)

So last night I got to go downstairs after the game to meet a few of the players and hay Hi, have them sign some other little trinket to add to the ever growing collection of merchendice, photos and pucks gracing my office. I don't know if other teams do this kind of thing, but it's pretty cool. Every STH gets one game a year where they go down stairs and as part of a larger group get to meet some players. They rotate who comes out to sign too. Some people could get Doan, some get whoever was scratched that night, you never know. Mine always seem to come on nights were we don't play very well. So that was unfortunate. Even after a loss the guys we got to see were nice. I guess it's a little easier when there's not a whole lot of consequence either way. First we had to wait for a little bit in a hallway outside the dressing room. There were maybe 30 or so fans? Maybe a little more. We waited for maybe 10 minutes and Nigel Dawes, Dimitri Kalinin and Petr Prucha come out in thier Coyotes Under Armor or whatever you want to call it and sign some things for fans, get groped by one or two (Not me) and are nice to everyone even though I guess we lost by a goal or two earlier. It was nice both that they came out and that whoever organizes these things picked a group of guys that came over at the deadline. It adds value to the experience since there really haven't been any events to meet them or get an autograph at yet. They were all pretty cool and even came back to take some pictures with people who forgot to take pictures the first time around. 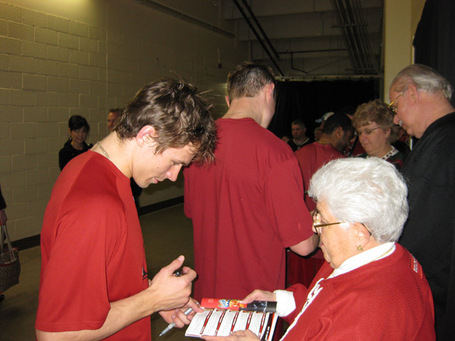 The reps told us that Martin Hanzal would be coming out in a few after he finished getting some treatment from the trainers. We waited around, wished they had chairs or something other than floor to sit on and generally ignored what had happened upstairs some short time ago. 5 minutes Later Marty came out and said hi to everyone. He's still working on the English I think. He was super friendly and unlike the previous guys had already changed out and taken a shower and was in his suit.  He was great about taking pictures and any time someone would ask his response was "Sure! Come here!" After which he put his arm around whomever and took a great picture. (See below.) It's nice that our guys do all these fan events and for the most part are more than happy to do them. There have been very few at any of the events that haven't seemed excited about meeting the fans or could at least do a half decent job of acting like it for a little while. The rare ones that could be bothered to at least pretend haven't stuck around very long (Lookin at you Olli...). I like that our team tries to bring in quality character guys and puts them out there like that for us. 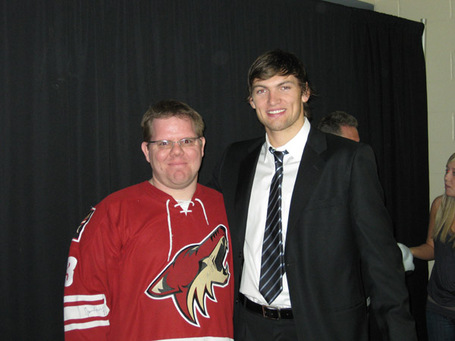 I guess there was also a hockey game going on before hand. I don't really remember a whole lot about that. I know that we scored first after Scottie Upshall scored his 14th of the season when he was able to get it past the glove of Mason on his second effort. That trade isn't looking so bad now is it? Upshall SInce the trade 7-4-11, Carcillo is 0-4-4. Before the Carci fans jump all over me, I still like him, just saying that all in all it wasn't so bad. Everything got a little fuzzy after that... It seemed like St. Louis did some good things, the Coyotes looked like the Islanders and Bryz got hungry and got distracted by the smell of hot dogs. He was mad that no one would get him any and was hitting things with his stick on the way to the second intermission. Maybe he was hiding a hot dog inside. I don't know. He must have found a few during the break though and gotten too full ore ate them too fast and got sick, because Montoya came in for the 3rd. Everyone else skated around. Hinote made a bad hit on Prucha and got a 5 minute major. We were nice about it and didn't score or anything. In fact we let David Perron, who was in the box for Hinote, jump right out and score on us to make it 5-1. That was nice of us. Pretty forgetable game for me as you can tell. I think I repressed the rest. At least I still had fun...