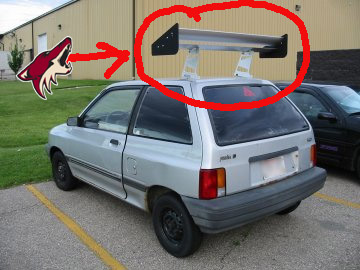 Really. Who puts a spoiler on a car like that? How dumb is that?

The Blues roll into town tonight tied in points with the Predators but behind in the wins column which puts them on the outside of the playoffs with only 3 games left to play. If that doesn't make a team hungry then I have no idea what will. We'll have to have our A game to make their night a bad one.

Bryz is Back: Al Montoya has plaed the last 3 games. He was hot in the first 2 but got shelled in the last one against the Kings. Hopefully the rest did him some good and we can take them down. a good game by Bryz is a necessity if that is going to happen.

The D Is Still Gone: Even in the perevious wins the D had looked sloppy. The other teams did too though which helped us out. We can't keep just letting the other team skate all over us and feed them the puck with sloppy passing out of the zone. It's a killer.

Going for the Sweep: For the first time since the Coyotes have been the Coyotes the Blues are going for the season sweep. We can't let that happen. It's time to have some pride in ourselves and take it to the other team.

Giving Up The Goals: St. Louis has given up 9 goals in the last 2 games. Their defense has been pourous as well. It seems like our team seems to be streakbusters for that kind of stuff though. Hopefully the announce team doesn't mention it on the air or we're going to have a tough time.

THE MOST IMPORTANT KEY!: I have a meet and greet with a few players after the game for STHs. We can't let them win! Then the guys will be all bummed and we're not going to have any fun. So really it's my enjoyment and entertainment that's important is what i'm trying to say.