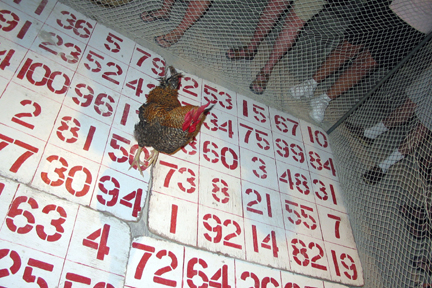 NHL GMs nervously wait for the official draft chicken to "choose" the team that will win the 2009 draft lottery.

Contrary to popular belief, or rather due to lack of anyone really caring to mention it, the Coyotes can in fact win the draft lottery. They just can't move up to the #1 pick. Should we win, we would move up to the 2nd pick, which would be a great player no matter who the Islanders would grab in that scenario. Here's the percentage chance of each team in the draft lottery winning the thing:

So our chances aren't looking all that great, but there's still a chance. Though it's also good that there's even less of a chance for the people below us. Likely we'll end up exactly where we are right now with the #6 pick. There should be plenty of quality players left on the board at that point, but nothing like Tavares/Hedman, at least not right away. Either way, I'll be covering it later tonight when it airs on Versus at 7:30 Arizona time.

Other things that will be coming soon to Five for Howling