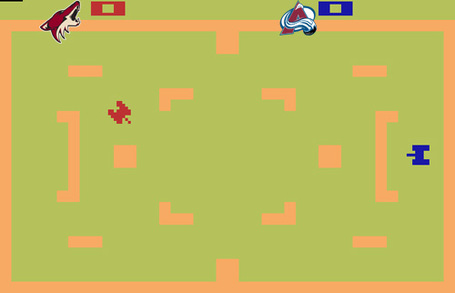 Coyotes red tank goes on the offensive while the Avs tank... Well it's just sitting there. 14th v. 15th should be a barn burner. How is Vs. not televising this?

This is not going to be a pretty game. The Avs who have been having some serious issues as of late against our guys in red that, while they've been winning some games of late, aren't likely to get out of the basement of the Western Conference any further than they are now. That doesn't mean I won't be watching, because I will, i'm just not expecting it to be pretty. Probably something like the Dallas game that was high scoring and lacking in defense.

You Killed My Father! Prepare to Die!: Al Montoya will get his first NHL start tonight. He'll be the first Cuban-American to play in the NHL. That's cool. There are a ton (tonne for our Canadian readers) of stories about this around the interwebz. I'm more excited that I fiannly get to start breaking out Princess Bride quotes now. Which of the Colorado players is Count Rugen? If he smacks someone with his stick that'll be even better! Sweeet! 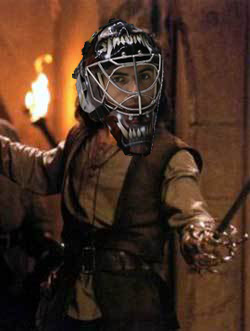 Def... something. I forget the rest.: Apperently the team didn't know what that word was last game either. Some played better than others, but the defense as a whole was not very good against Dallas. Sure the Avs aren't very good this year either, but still, get it together guys!

Someone Wants a Contract: I said it last game and Enver Lisin and Joakim Lindstrom showed up to play. Enver got 2 goals and an assist and Lindstrom played a good game even though he wasn't on the score sheet. He was being a pest to the opposition and controlled the puck well. I'd expect Enver to stay in tonight, but no word on what the lines will look like as of yet.

Avs Want the Tank: Or at least thier fans do. They probably won't catch the Isles for the #1 spot in the tank standings, but they're a solid 2 if they lose tonight. If they pick up points they'll move back up into 3rd. It's been a bad year in Denver with injuries and not having a goalie to save many games for them. Tavares or Hedman would certainly help next year.

Doan is On Fire!: 10 points in his last 7 games. He's had a great year even if the Coyotes as a team haven't. No one can put anything on his shoulders for the team not being where we hoped as he leads the team in Goals, Assists and (obviously) Points with 29-38-67. Capatian Coyote is the man and should increase his stats against the struggling Avs.

Note: The game is not on local TV tonight. YOu might be able to get it via Yahoo, but local IPs will likely be blacked out. SOme of us might be stuck with the XTRA910 radio feed.