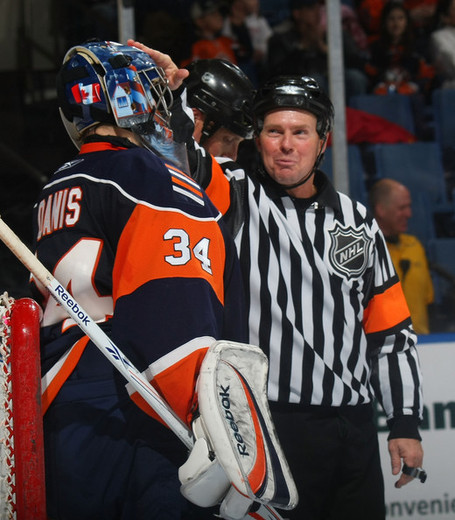 Hey, I'm awake. Just in time for our next to last place team in the West to take on the leaders in the Tank for Tavares division, the New York Islanders. Normally i'd say this would be a boring game, but the Isles just beat the Devils 7-2 yesterday and a couple days ago we put down the Bruins, so it could be a good game if those same teams show up.

Special Teams: I don't know how much worse our special teams could be. We managed to convert on a total of one of our six opportunities on the PP, but the PK was awful. The Sabres scored three times on six chances. THis has been the achilles heel for our team all year.

Tordjman? TORDJMAN?!: Josh Tordjman got called up after the Tellqvist trade from San Antonio. He's been playing well down there and I suppose if you're getting your first NHL start it may as well be against the Isles. Better play well in front boys.

Keep the lines even if they didn't win: After any loss Gretz likes to mix the lines up. Hopefully he doesn't and gives them some time. He won't, but it'd be nice. There are reports that Lisin, Winnik and Fedoruk in with Hanzal(!?), Mueller and Lindstrom out? I don't get it...

Learn from Lombardi: He knows how to win a friggin faceoff! We haven't been too good at that this year, but in Buffalo he went 20 of 28 for 71%! Wow. He's leading faceoff drills in practice from now on.

Start shooting again: We've been pretty slow coming out of the gate the last couple games. In Boston everyone was new so I could understand, but to take half a period to start shooting will get you behind quickly.

That's all. See you in the gamethread GO YOTES!