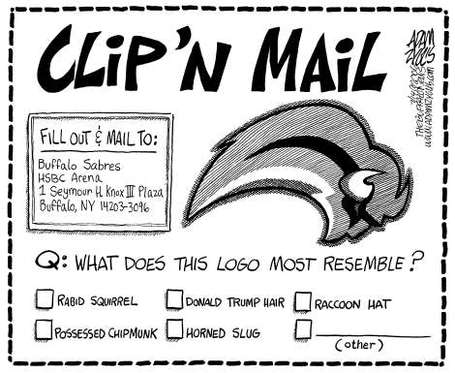 Yeah, i'm sure you've seen that comic before, but it doesn't stop being funny...

We'll make this a fact one since the game starts soonish and since it's back-to-back. The boys put together a great performance last night. The new guys did good, Bryz was lights out except for his one softie. We'll get to see Telly again, but he'll likely only be on the bench. Patrick Lalime will get the start tonight and he's been playing fairly well since Ryan Miller has been knocked out. If we can put in the same kind of effort tonight that we did against Boston this could get interesting. Lalime, like I said, has played well but he's not Tim Thomas and more of those chances we created last night could go in the back of the net.

Build on the Immediate Chemistry: I don't know what it was but everyone was clicking with each other, they were on the same page, it just looked natural. That was with little to no practice time and just getting to Boston on time. Man though if they get practicing and get it locked up even more this could be dangerous.

Bryz Needs to Play On the Same Level: Bryz was lights out after that softie in the first last night. Now he just needs to build on that and keep it going. He's the big horse now Tordjman shouldn't see much time if any so show us what you can do.

Keep the New Guys Rolling: Upshall with a pretty goal and Dawes with an even prettier assist. If these guys keep getting involved people will be forgetting about the guys we traded for them. Now we just have to get started on RFA deals for a few of them.

Keep that effort going: Guys were diving for pucks, crashing the net, KT was puching Chara... What got into them last night? Do you need to pretend that they're the B's? The Wings? Whatever it was we'll hire a hypnotist to make you thing they're the same guys if that's what it takes.

LINES! I know everyone has said it a thousand times, but this time I mean it. Those line last game worked to perfection. Gretz if you mess with those I will have to hurt you badly. DOn't change for changes sake because the intangables were all there. NO TOUCHY!