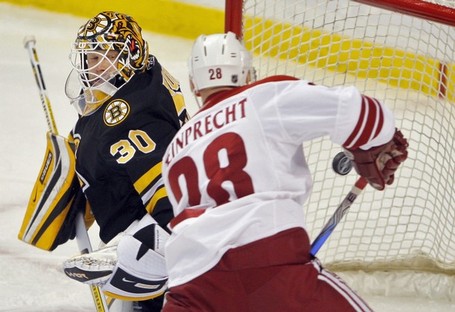 Steven Reinprecht puts the puck past Tim Thomas for the game winning goal agains the Bruins last night. (via www.daylife.com )

Awesome game last night! The Bruins tried to pound us into submission, but our guys stayed in the third period and Bryzgalov shut the door. Our season may not be salvageable in terms of making the playoffs, but this was a big win regardless. The new guys looked good and were skating their butts off. Turris looked good in his first game back since being called up from San Antonio too. He was checking all over and was grabbing at Chara when he started taking liberties on Viktor Tikhonov. That's gusty, dangerous sure, but gutsy.

Here's a look at the highlights:

Chuck Kobasew opened the scoring in the game with a goal that just trickled in between Bryzgalov's pads that i'm sure he was kicking himself for. THere was a little bit of a screen, but he should have had that one.

Scottie Upshall scored later in the first with a backhander after digging it out of the corner. He was just able to beat Thomas. That's a pretty good way to get yourself in a fan's good graces after replacing a fan favorite.

Steven Reinprecht got the game winner midway through the 2nd period after getting a sweet feed from Nigel Dawes to the open side of the net to beat Thomas. In the process they made Wheeler look like the rookie he is, which was awesome.

The best part of the game though was seeing a team that, even with 5 new players in the lineup, looked like they had chemistry. The Doan - Lombardi - Prucha line looked great. The Dawes pass to Rhino looked like they just knew where the other was going to go. THis is the way we needed to be playing.

The Boston media has gone absolutely crazy with the loss. Boston was already down after losing a few but for the top team in the East to lose to the lowly Coyotes... Here are a few samples of the headlines:

Bruins Now the Hot Ticket? Good Luck With That