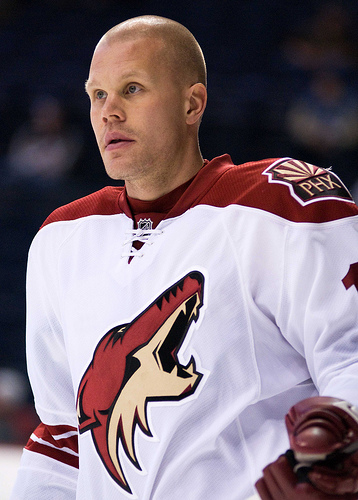 *Now that i'm both home, and fed I can actually get all this stuff done!

This deal was probably the biggest deal of deadline day. Scratch that. It WAS the biggest. Phoenix dealt Olli Jokinen (softOllio, Stay-Puft, et al.) and a 2009 3rd Rd. Pick to Calgary for Matthew Lombardi, Brandon Prust and a 1st Rounder. Not a bad haul. This should make a lot of fans here in the desert pretty happy. For some reason Olli never really fit in here. There are reports that he didn't really get along with the younger guys for some reason, though Gretzky says it isn't so. At the same time he never really connected with the fans here either. They were very excited to have another star player to play alongside Shane Doan, but it never really materialized. Instead they got a guy that even at 21-21-42 didn't seem to really care one way or the other. He'd go out and play without a whole lot of effort or grit or whatever term you like for finding a way to win. It's like he was just waiting for something that never came. Whatever it was it wasn't here and so they shipped him and his 5.25 million to Calgary. Congrats. You get to taste the playoffs Olli, enjoy it until you get beat down in round 1.

In return for Olli the Alien we got Matthew Lombardi and Brandon Prust. Oh and John Tavares (If Garth Snow will wake up to the fact that our 1st rounder and the Calgary 1st are better than his one first rounder). Lombardi is a solid center who is well liked by Flames fans like the ones over at Matchsticks and Gasoline. Prust is apperently having some concussion issues from getting hit in the head repeatedly. He'll drop the gloves at times, but isn't as scrappy as Carcillo who we traded away later. (He's up next.)

All in all I'd say we did pretty well in this trade we got rid of one guy that wasn't working out pick up one solid guy in Lombardi, a project in Prust and a 1st rounder.