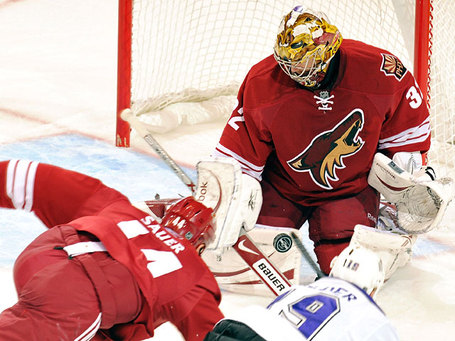 As Phoenix's backup goalie for the last 3 seasons, Tellqvist has done a pretty good job coming in for short stretches of games to fill in for Ilya Bryzgalov or previously Curtis Joseph. He's a solid guy and the guys on the team love him. They always seem to play just a little harder in front of him for some reason. That being said, this was a deal that had to be made. GM Don Maloney doesn't like to have Assets walk away at the end of the year if they're UFAs and not get anything for them first. Telly had been solid here, but was looking for some more starts. While I don't know if he's #1 goalie material, he'd be great on a team that split the games a little better. A lot of fans have questioned only getting a 4th round pick for him. To that I'd say it's better than nothing. That's what a lot of teams have gotten for their goalies this year. Teams put goalies on waivers that were fairly good and no one took them just for the remaining salary. Teams could have grabbed Manny Legace for nothing recently, and the Maple Leafs got Martin Gerber off of waivers just today. I mean, they got played off by some younger guys, but Buffalo needed someone to fill the gap since Ryan Miller is on the IR. For whatever reason there just hasn't been a market for goalies this year. Not a great trade for the Coyotes, but it's better than just letting an asset walk. We've also got Josh Tordjman, Al Montoya and Joel Gistedt in the system so lots of young goalie prospects looking to get some time.