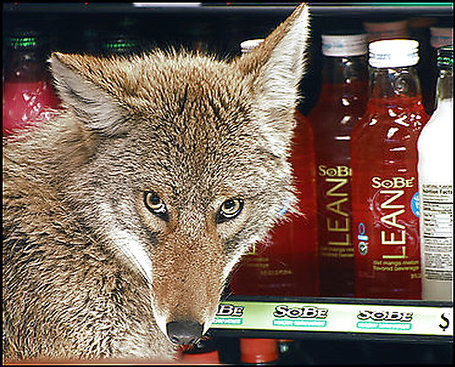 Coyotes are in your local San Jose Quiznos stealin yer Sobe Lean. I'm sure he'll be a silicon valley jerk with a bluetooth soon enough though.

Tonight we face the Terrible terrible, tied for the league-lead in points, attrocious San Jose Sharks. They suck. Okay, well they don't. But I still can't stand their success as we miss the playoffs. Therefore, much like the inexplicable beatdown the Islanders (???) gave to the Red Wings last night, I want to see our guys go at these San Josers (pronounced like Hosers) like a friggin spider monkey!

Your Bryz is on Fire: Yeah, Kings of Leon may have different lyrics, but my change of lyrics does not change the fact that except for the blip against Anaheim last week Bryz has been red hot. He's had a couple games where he's eaten 3 goals, but even those have had him with an astronomical amount of shots faced. But for his head stands we're further in the NHL basement.

Keep Our Junk Out of the Box: Sorry, i'm obviously on a musical kick (link NSFW)with today's five. Oh well... The Sharks have been making a killing on the power play but haven't been as effective at even strength. They can absolutely turn it on though but if we stay out of the box as much as possible we avoid both they're great PP unit and our anemic PK.

Who Goes With Shelley?: We have to have someone to match up with him and keep him in check. McGrattan is done for the year, so I would imagine that Fedoruk would be in if he's been doing well at all in practice. I like what Winnik was bringing against the Oilers, but he just doesn't have the size to keep a guy like Shelly from crunching our smaller guys. That means one less quality skater most likely. Oh and a song... um... Fight Test!

Doan Is Dominant: Shane has been the one constantly great player once again all year. He controls the puck and sets the tone when he's on the ice. If he finds a connection again in the every changing lines of Gretz we can take another game off of the Sharkies. Hopefully we see more sweet moves from him in our visit to the tank.

Solve the Tank: HP Pavilion has been murder on the visiting teams. The Sharks have gone 30-3-4 ther over the season which is just rediculous. They've also given up only 79 goals. That doesn't bode well for our oft weak offense. On the flipside we have gone 2-2-0 against the Sharks this year and have a nasty habit of showing up against teams that should beat us. In any event it's not going to be an easy one and we'll have to get past Nabby early to have a shot. All they've got is spoiler energy to run on now, so they'll have to turn it on to make it happen.

Odin Out! Or something. GO YOTES! Hope you liked the musical interludes...)